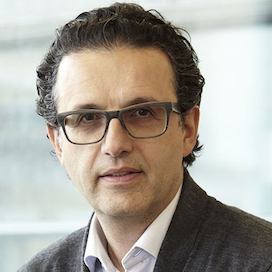 David ran the UK’s second commercial broadcaster for seven years. Under his leadership the channel launched popular new formats, dropped old ones, created the All4 streaming platform, took the film studio Film4 to Oscar-success, and redefined coverage of Paralympic sports. He considers how organisations deal with disruption, attract and get the most from their talent, develop original ideas, and balance public, internal and political pressures.

David Abraham served as Chief Executive of Channel 4 for seven years. During his time in charge, the media industry underwent huge change, and the UK’s second biggest commercial broadcaster dealt with political, public and commercial challenges. Throughout, David’s leadership style of combining creativity, strategy and individual freedom saw the company grow in reputation and influence.

Joining Channel 4 as the digital revolution was starting to change viewing habits, David had to steer the organisation through the shift to streaming and online watching. Broadcasters became content producers with an increasingly interactive relationship to audiences. He led developments of the All4 streaming service, housing both recent and classic Channel 4 shows as well as exclusive content. He also helped shape the company’s policy towards protecting viewer data, balancing commercial imperatives with corporate values and regulation.

David also took the company away from a reliance on tried and tested formats, notably Big Brother and imported shows, diversifying the schedule with factual, news, drama and entertainment programmes. Alongside new shows like Gogglebox and Educating Yorkshire there was a move into more sports coverage. This latter area included coverage of F1, the Grand National, and most notably Paralympic sports, an area revolutionised by the broadcaster with their London 2012 work that included launching The Last Leg. It saw the channel beat the BBC’s Olympics coverage to that year’s Bafta for sports coverage. He also had to navigate political pressures over the channel’s ownership (a uniquely publicly-owned, commercially-funded model), and its commitment to news and investigative programming. He built on the broadcaster’s already enviable film studio business with ever more popular and critically acclaimed international hits including Ex Machina, The Iron Lady, and 12 Years A Slave.

As a leader, David has developed strategies to balance commercial necessities and creative, innovative cultures. He has built teams to take on changes in technology and consumer demands, and found ways to attract talent in a highly competitive media and technology market. He has dealt with disruption, scrutiny, and complex stakeholder relationships by constantly evolving organisations and giving responsibly to those best placed to exercise it.

Prior to Channel 4 David led UKTV, including the launch of its biggest channel, Dave, and the Discovery Channel in the UK. In the US he ran the cable network TLC. Before television he worked in a series of advertising and creative agencies, including running his own (the first employee-owned ad agency). David has now started Wonderhood Studios, which aims to bring together television production and branded content alongside data analytics. He remains a leading and much-respected figure in the media industry and is a Vice President of the Royal Television Society.