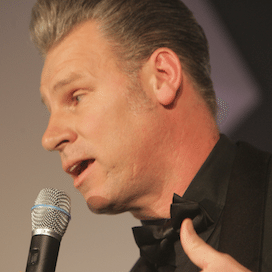 Armed with his PhD in horror, Mark covers a broad spectrum of arts and culture. He wonders if professionals are needed, now everyone’s a critic.

Mark Kermode is a regular presenter on BBC 2’s The Culture Show, and has won awards for his film review slot on Five Live’s Simon Mayo Drivetime.

Mark started his career in film journalism and broadcasting after reading English at Manchester University where he wrote his PhD thesis on horror fiction. His early work was as a print journalist, writing for City Life in Manchester, and then for Time Out and the NME in London. He has also written for a wide range of magazines, journals, and newspapers, including The Independent, The Guardian, Vox, Empire, Flicks, Fangoria, and Neon.

Mark moved into radio broadcasting, contributing to and presenting programmes on BBC Radio One, Two, Four, and Five, until he became resident film critic for Radio One. He presented film programmes such as Clingfilm and Movie Update and contributed to the Mark Radcliffe show and the Evening Session.

He is now resident film critic and presenter for Film Four/Channel 4 Television. He presents the weekly 'Extreme Cinema' strand, introducing films of particular notoriety on Film Four, and writes, researches, and presents long-form documentaries for Channel 4. These have recently included In Search of the Blair Witch, On the Edge of Blade Runner, and Scream and Scream Again: A History of the American Slasher Movie.

He also writes and presents two ongoing series on Radio Two, The Directors and Celluloid Jukebox, both of which run for six weeks a year, and works as a contributing editor to the British Film Institute's Sight and Sound magazine, providing reviews and occasional features.

“Mark was great and went down really well”