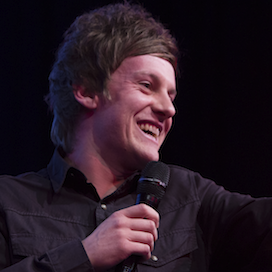 One of the UK's leading live standups, Chris has starred in a BBC sitcom, has an Amazon Prime special, fronted Little Mix's talent show, and co-hosts (with wife Rosie) one of the country's most popular podcasts. Described as a brilliantly engaging natural storyteller, he delivers everyday observations and tales of marriage and challenging petty rules with energy and charm.

Chris Ramsey is an actor, writer, presenter and standup comedian. He is the host of the Shagged, Married, Annoyed podcast alongside this wife Rosie, and has presented two of his own TV shows – The Chris Ramsey Show and Chris Ramsey’s Stand Up Central.

Chris’s brand of cheery observations, delivered with down-to-earth energy and charm, cover subjects from TV shows to litle victories against petty rules, American tourists to stag dos in his native South Shields, and his fear of confrontation. Described as "a brilliantly engaging natural storyteller” by the Evening Standard and as "spinning blokey pub banter and unpretentious patter into stand-up gold" by The Guardian, Chris has established himself as one of the country's leading live comedy acts. He's an Edinburgh Comedy Award nominee and was the warm-up performer for The Graham Norton Show.

Away from standup, Chris starred as the secretly-married Jack in the BBC sitcom Hebburn. He reached the semi-finals of the 17th series of Strictly Come Dancing. His other TV credits include appearing on 8 Out of 10 Cats, Celebrity Juice, and Celebrity Gogglebox (alongside musician Example). He's co-hosted I'm a Celebrity... Extra Camp, guest hosted The One Show, stared in his own Amazon Prime standup special Approval Needed, and hosted BBC One's  Little Mix: The Search.

“Very entertaining, everyone enjoyed the performance.”