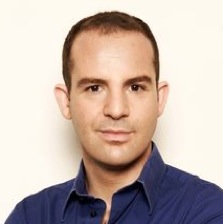 Entrepreneur, writer and broadcaster Martin became known in the media as the Money Saving Expert. His website of the same name became the UK's biggest forum for saving tips, deals and campaigns. Martin famously led calls against unfair bank changes and energy pricing, and has become a leading campaigner for consumer rights.

Martin Lewis is an entrepreneur, writer and broadcaster best known for founding the MoneySavingExpert website. He has become a leading campaigner and commentator on issues around personal finance, consumer rights and the financial services industry.

After staring his career in financial communications Martin moved into journalism, working for the BBC’s Business Unit. After focusing on money saving and consumer advice on TV and in print, Martin started to appear as the Money Saving Expert on ITV’s Tonight and Good Morning Britain. Alongside these appearance he also founded the MoneySavingExpert website, a free forum for advice and information on everything from deals and money saving tips to cautionary tales and campaigns against unfair practices.

Martin’s profile, as well as that of his website, continued to grow with columns and articles in national newspapers and magazines, and regular broadcast media appearances. He famously campaigned against unfair bank changes and called for greater scrutiny of energy prices. MoneySavingExpert became the biggest site of its kind in the UK, employing over 100 staff and with over 10million visitors a month.

Although he sold the website, Martin remains involved with MoneySavingExpert as executive chairman and continues to contribute to its content. He also remains an active campaigner on issues from student finance to the effects of debt on mental health, and has published three books on saving money and making the best, most informed financial choices. He also continues to be a regular in the media, from The Sunday Times to syndicated columns in regional newspapers, Radio 5 Live to Question Time.