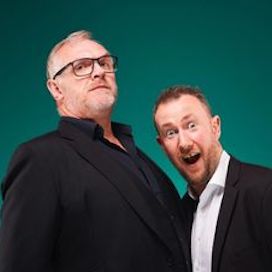 The hit TV show returns to its live roots with an interactive version for any audience to participate in. Whether it’s teambuilding or celebrating a job well done, audiences can follow in the entertaining, and sometimes embarrassing footsteps of the likes of Bob Mortimer, Sally Philips, Nish Kumar, Rose Matafeo and Noel Fielding in undertaking creative, silly and bizarre tasks.

A television phenomenon, Taskmaster started out as an Edinburgh Fringe show, developed by Alex Horne as a way to get comedians to do stupid things. Each month, over the course of a year, he sent six standups a variety of unusual tasks. A compilation of their efforts became Alex’s show, The Taskmaster, and was so popular it was followed the next year by Taskmaster II featuring ten performers. Alex then took the idea to television and it found a home on the comedy channel Dave, where it became the channel’s most popular show and a Bafta-winner, before moving to Channel 4. It also has versions around the world from the US to Finland to New Zealand.

Over the years performers from Al Murray to Katherine Ryan, Frank Skinner to Romesh Ranganathan, Richard Osman to James Acaster have been asked to create a trailer for Taskmaster the movie, write songs, destroy cakes and hide pineapple about their person. All under the severe judgement of Greg Davies and in the hope of winning a replica of his head.

Remaining hugely popular on screen, the show has also returned to its live roots with interactive versions open to anyone. Whether teambuilding or simply showing off, Taskmaster events come in various formats that allow anyone to host, or hosted live by Alex, or with recorded segments from Greg alongside Alex. It can also include tasks designed for a specific event or audience, and for groups from 5 to 100.