Part of the first team to climb K2 during winter and the record holder for climbing the world’s fourteen highest peaks in the quickest time, Nirmal Purja is a pioneer in the world of mountaineering. As in his Netflix show, he shares the lessons he learnt in these high pressure, high-altitude situations and inspires others to reach for the impossible.

Nirmal Purja, who more commonly goes by Nimsdai, is a mountaineering phenomenon with an ever-growing list of world records. With feats including completing the first-ever winter ascent of K2 without oxygen and climbing all fourteen of the world’s 8000m peaks in just six months, he is an inspiration to many and reminds them that nothing is impossible.

Born in Nepal, Nimsdai began his career in the military as a Gurkha. He went on to become the first Gurkha to join the UK Special Boat Service (SBS) and, later on, the subject matter expert for extreme cold-weather warfare. It was while serving that his passion for mountaineering began. After completing his first trek to the Everest Base Camp he wasn’t satisfied so, within the same trip, he persuaded his guide to teach him how to climb ‘for real’ and take him up to his first summit, the 6119m Lobuche East. From there, around his military duties, he pushed himself harder and higher and quickly completed his first ascent of Everest, Lhotse and Makalu, collecting his first world record and rescuing a stricken climber on his journey.

After discovering that he was naturally able to acclimatise to altitude more easily than most, his mountaineering ambition grew and he left the SBS to focus on his next adventure. Named ‘Project Possible’, Nimsdai planned to climb the world’s fourteen highest peaks in seven months, seven years quicker than the outstanding record. He completed the challenge with weeks to spare, despite being held back by storms and rescue missions. His thrilling expedition, which many claimed was impossible, was documented in the popular Netflix series 14 Peaks: Nothing Is Impossible.

Nimsdai stands as the perfect example of how with the right mindset, planning and team, it is possible to achieve even that which seems impossible. Whenever he is asked how he does it he says “everything in life is possible armed only with a determined approach and positive mindset.”

As well as continuing to climb and break world records, Nimsdai leads others into high altitude adventures and has published his story, Beyond Possible. He also advocates for keeping mountain environments and communities safe. To play his part, he has started the Big Mountain Cleanup project to ensure waste left by past climbers is removed and the mountains are restored for future generations of mountaineers to explore. 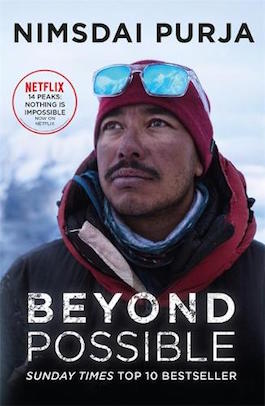