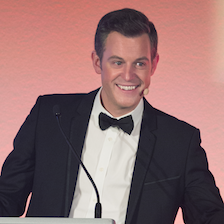 The One Show, Countryfile

From Blue Peter to The One Show, Crufts to Countryfile, and coverage of the Olympics and Royal events, Matt is one of the most popular and versatile presenters working today.

Matt Baker is one of the country’s most popular and versatile presenters, best known for his time presenting The One Show, as well as Countryfile and Blue Peter.

After presenting Blue Peter for over seven years, during which he won the Bafta for Best Children's Presenter two years in a row, Matt moved to The One Show. He co-hosted the popular magazine show for almost ten years, whilst also presenting and reporting for Countryfile. Appropriately for someone raised on a farm and a former president of the National Federation of Young Farmers' Clubs, he also presented the revived One Man and His Dog, and is a regular co-host on Channel 4’s coverage of Crufts.

A former gymnast and sports acrobatics champion, Matt’s first work in broadcasting was covering gymnastics for BBC One’s Grandstand. He regularly returns to his first love as a commentator for BBC coverage of the sport at Olympic and Commonwealth Games and World Championships. His sporting background meant that whilst working on Blue Peter he was first in line for challenges including training as a stunt man and going through the Royal Marines’ recruit course. He’s also pedalled a rickshaw from Edinburgh to London and learned show jumping for Children in Need and Sports Relief respectively.

Amongst his many credits Matt has hosted programmes including Secret Britain, The Nature of Britain, and Wild Alaska Live. He’s also presented live classical music concerts for the BBC and competed in Strictly Come Dancing (where he finished second). He’s made appearances on shows from Top Gear to Never Mind the Buzzcocks, and even made a cameo appearance on Doctor Who. On radio, he’s fronted shows on Magic and Classic FM and Radios 3 and 4.

“A legend, and amazing host”