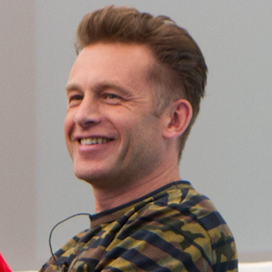 Known for fronting The Really Wild Show and Springwatch, Wildlife TV presenter Chris Packham is a dedicated environmental campaigner. He educates and inspires audiences on the natural world and shares stories of travels across the globe.

Chris Packham is a naturalist and wildlife TV presenter and a leading voice in inspiring audiences to take notice of and get involved with the natural environment. Known for hosting BBC 2’s Springwatch, Autumnwatch, and Winterwatch, he is also a writer and respected wildlife photographer.

After first making his reputation as co-host of the BAFTA award-winning Really Wild Show, he went on to present many shows including the nature photography series Wild Shots and Nature’s Calendar, exploring wildlife and natural history all year round. In more recent years, he has fronted documentaries including Inside the Animal Mind, Blue Planet Live and Animal Einsteins and he even opened up about his experience as a high-functioning person with Asperger's in Asperger's and Me.

As a campaigner Chris is a vociferous opponent of the badger cull and has called for the banning of driven grouse shooting. He has won many awards for his campaign work including the Dilys Breese BTO Medal for ‘his outstanding work in promoting science to new audiences’ and coming in second on Britain’s 50 most influential conservation heroes in The Wildlife Power List.

Away from television, Chris sits on the board of several conservation charities and has twice been voted Wildlife Photographer of the Year. His photography credits include Nature Detectives, The Great British Birdwatch and The London Wildlife Challenge. He has also written a memoir, Fingers in the Sparkle Jar, about how the natural world brought meaning and purpose to his childhood.