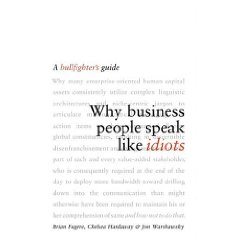 Words matter, but this book’s banal bag of tricks won’t tell you how to keep slack language out of your presentations or how to make ’em laugh, laments Jeremy Lee.

When the new chief executive of Prudential proudly announces his intention to ‘focus one million per cent on the future’, we are reminded that business people from the top to the bottom have a problem with language.

Like football managers struggling to construct whole sentences in post-match interviews, the problem is that superlatives become meaningless.

You have to keep increasing the stake while the currency constantly loses value.

If you accept that the way a business communicates reflects its health and affects the way it’s perceived internally and externally, you must also accept that words matter a great deal. Everything from routine e-mails to the turn of phrase used to rouse the troops at the annual management conference deserves serious consideration.

This is the starting point for the three US consultants-turned-authors, and few would disagree.

But that’s as far as it goes. The book attacks banality with banality – mixed with a whole heap of contradictions. It advocates simplicity and economy, but takes 150 pages to tell you a dozen basic rules. It rails against overblown expressions, then alerts the reader to the dangers of ‘document obesity’.

The authors claim you don’t need to be a stand-up comic to raise a laugh in presentations, then recommend throwing in the odd Chinese proverb to ‘flex your humor’. They repeatedly call for ‘authenticity’, only to suggest we avail ourselves of some useful stories about the rich and famous at www.anecdotage.com.

With astonishing predictability, the authors fix their sights on easy targets such as PowerPoint and political correctness. Both are clearly inventions of the devil, the latter partly responsible for the Columbia Shuttle disaster in 2003. Twaddle. PP is an immeasurable advance on slides, while PC simply exists to encourage fairness. Of course, both succumb easily to ridicule, but there’s little wrong with the technology or the sentiment – only the way each is habitually abused.

Douglas Adams once told me that the internet would spread democracy by enabling ‘the many to speak to the many’. In fact, the proliferation of blogs looks more likely to breed conspiracy theories than encourage greater participation in the constitutional process. Similarly, alongside a tiny number of star players, we now suffer from a rash of bland corporate websites, mostly signifying nothing. These shortcomings are not caused by bad technology or even primarily by bad design, but by bad language. And I don’t mean swearing.

Fugere, Hardaway and Warshawsky are right to say that amid poor competition, the clever communicator can easily stand out – but you’ll find a more cogent argument and a far better roadmap in Nordstrom & Ridderstrale’s Karaoke Capitalism.

On a personal development level, the biggest fallacy Idiots and many similar books perpetuate is the myth that a few tricks and a little application are all you need to turn yourself into a magnetic public speaker. More twaddle. As someone who works with many of the most accomplished speakers in the country, I have learned that technique is almost useless without natural flair.

With the exception of the occasional sporting celebrity, the stars of the speaker circuit have a rare talent to engage – hence their stratospheric fees.

The best speakers, from Tom Peters to William Hague, take you into their confidence. They delight in sharing something you didn’t know about something or someone you do know. They paint pictures in your mind, like good radio drama, and turn messages into stories. They seem to look into the eyes of every member of the audience, never at an Autocue screen or that imaginary spot at the back of the room. They make every twist of the tale sound fresh, even if they’ve delivered it a hundred times before – and they invariably leave you wanting more.

At the other end of the spectrum are those speakers who move from the token opening joke to the meat of the speech with a pause, a slight cough and a perceptible change of tone. What they’re really saying is ‘and now I’m going to send you into a deeeep sleeeep’. These are the types who tell you what they’re going to say, then say it, and finally in a blistering coup de theatre remind us what they’ve just said. All too often, they are the victims of presentation skills training.

When Alastair Campbell takes on a corporate speaking engagement, he also makes two other speeches without payment: one for his party and one to raise money for charity. Perhaps we should also use this principle: if you insist on buying this book, promise me you will also buy two beautifully written novels. Not only might they help keep you sane, they should also stop you resorting to Chinese proverbs the next time you have to make a presentation.

– Jeremy Lee is the founder of JLA, the speaker bureau

IT IS normally the stuff of green room gossip or furtive conversations between celebrities and their agents. However, a price guide published by one of the country’s leading booking agencies has revealed the pecking order of some of Scotland’s biggest names.

The list reveals the identities of the AA-list stars, who command more than £25,000 to grace a corporate shindig, and the E-listers, who receive less than £1,000 for an anecdote-packed after-dinner speech.

The highest earning Scot on the books of the JLA agency — which counts Buzz Aldrin, John Major and Joanna Lumley among its clients — is Lulu, who is awarded the coveted AA ranking.

The butcher’s daughter from the east end of Glasgow, who made her name at 15 with the hit single Shout, commands a minimum £25,000 fee.

Meanwhile, at the other end of the spectrum is the D-list roster comprising Jackie Bird, the Scottish newscaster, Dougie Vipond, the television presenter, and Tommy Docherty, former Scotland and Manchester United manager. According to the agency, corporate clients can expect to pay about £2,500 for celebrities in this category.

JLA’s B-list Scots, such as Lord Robertson and Kirsty Young, the Five newscaster, can make double that on the corporate circuit.

Although Fred MacAulay is considered worthy of about £10,000 for an after-dinner speech, the comedian and radio presenter is listed only as a C-grade entertainer.

A-list Scots celebrities such as Kirsty Wark, Carol Smillie, Gordon Ramsay and the former Labour spin doctor Alastair Campbell can earn up to £25,000 for an appearance.

“I’m not surprised that Lulu can command big fees — she is an absolute icon, a superstar,” said Roddy Martine, an Edinburgh-based social commentator. “She is also a very together person and is great fun. She now has this quite posh accent, but I was in the back of a car with her one time and she saw someone she knew. She rolled down the window and started shouting out of it in an accent that was pure Glasgow. She’s never lost herself and I think people appreciate that.”

However, Martine expressed surprise at some of the other ratings, which he said were down to a London-centric perception of celebrity: “I would have thought that Jackie Bird would make a bit more than her rating suggests.”

Jeremy Lee, founder of JLA, said the fee bands are intended only as a guide. He denied that celebrities were motivated solely by the money.

“If they did it only for money it would very soon become soul destroying,” said Lee. “There are some — I won’t mention names — who have a reputation for doing a short speech and leaving as soon as they can.

“But when you see someone like Ian Hislop or William Hague at an event, it is obvious that it is not a chore — they really enjoy meeting people.”

Coe To Strike Gold – Whatever Happens To Olympic Bid
Posted on June 16, 2005

With three weeks to go until we learn who’s won the 2012 Olympics, the leader of London’s bid, Lord Coe, is making sure that – win or lose – he doesn’t end up on the breadline.

Should London emerge victorious on 6 July, Coe will carry on at the bid, and has already committed himself to London 2012 until December.

If London loses, things also look bright. For I gather that – with a nod and a wink to Cherie Blair – Coe intends to explore a career on the lucrative after-dinner speaking circuit.

The former Olympic athlete is on the books of JLA, an agency that counts William Hague and Alastair Campbell among its stars. As a “B-grade” speaker, he can command fees of up to £10,000 a go.

Although Olympic commitments have kept Coe occupied in recent years, there’s a good chance he’ll have time to spare after the International Olympic Committee’s decision. So I gather that – in a move that invites accusations of “cashing in” on failure – JLA is sounding out customers on Coe’s behalf.

“He already has interest in a large number of bookings after 6 July, not dependent on the outcome of the bid,” says the firm’s Jeremy Lee. “This shows that, regardless of what happens, he’s in big demand.”

Coe’s spokesman yesterday denied any profiteering from his position, and stressed that Coe hadn’t yet confirmed any dates. “You couldn’t find someone more dedicated – it would never cross his mind to cash in.”

IT HAS not taken him long. David Blunkett, still enjoying his £3 million grace-and-favour Belgravia mansion despite losing his job as Home Secretary, has signed up with an agency to offer lucrative after-dinner speaking arrangements.

Large companies are being approached by e-mail with the news that he is on offer from JLA, one of the larger firms in the field, which has also recently acquired the rights to Sir John Stevens, the retiring Met Police Commissioner. No fixed fee — “I would discuss each individual one with David,” says JLA’s Tom McLaughlin — but a comfy five-figure sum should be assured for every rubber chicken dinner. Useful for a man whose salary dropped from £130,000 to a mere £57,000 when he quit.

The agency also represents William Hague, who has made quite a success of the after-dinner circuit, and Mervyn King. No, not that one — a South African judge who is apparently a whiz on corporate governance.