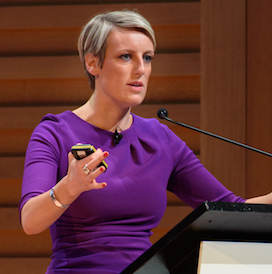 Now presenting her own Channel 4 show, Steph went from Black & Decker engineer to BBC Breakfast business reporter and co-presenter as well as fronting Watchdog, Pocket Money Pitch, Made in Great Britain, and Shop Well For Less. In the process she’s been trained in lean production, explained monetary and economic policy, and danced an impromptu Irish jig live on air.

Award-winning journalist and broadcaster Steph McGovern is the presenter of the eponymous Steph's Packed Lunch, Channel 4’s daily live lunchtime show.  Steph is also one of the hosts of Have I Got News For You on BBC One and regularly appears on TV and radio panel shows.

Prior to this, Steph worked in financial journalism for over 15 years and spent 8 years on BBC Breakfast, travelling all over the UK to cover economic news and broadcast live from over 500 businesses. Whether speaking to factory workers or FTSE 100 CEOs, Steph’s mission was to uncover and explain the real economy. This is something she has continued in her Channel 4 show, with regular features such as her Small Business Market and Job Clinic.

Away from news, Steph launched her own CBBC show looking for the next generation of entrepreneurs, Pocket Money Pitch. On BBC Two’s Made in Great Britain she joined 21st century makers exploring the skills and industries that built the nation. She co-hosted five series of the popular BBC One show Shop Well For Less and four series of the consumer rights institution Watchdog. And she joined Hugh Fearnley-Whittingstall to present the BBC One health show Easy Ways to Live Well.

Before becoming a correspondent, Steph was the lead producer of financial news for the BBC, working with then Business Editor Robert Peston at the forefront of the award-winning coverage of the credit crunch and banking crisis. She soon began broadcasting herself, and Steph delivered the business news on 5Live, Radio 4 and on the Chris Evans show on Radio 2 before getting a fulltime role on BBC Breakfast.

Originally from Middlesbrough, Steph started as an apprentice engineer at Black & Decker where, aged 19, she won the title of Young Engineer for Britain before studying at University College London.

Outside of work Steph is involved in community and education projects. She is a mentor for young people in her native Teesside and runs workshops with schoolchildren around the North East. Steph is a patron of the charity Rubies, supporting disadvantaged children, and is a former champion Irish dancer.

Steph’s a perfect combination of ‘plugged in’ and ‘credible’ – while remaining utterly down to earth. I’ve seen her demystify financial markets for grey-suited conference delegates and whoop up a roomful of excited awards contenders. It’s a fabulous sight to witness. I’m certain Ms McGovern’s profile is on a swift upward trajectory… JLA Agent Siobhan Jackman