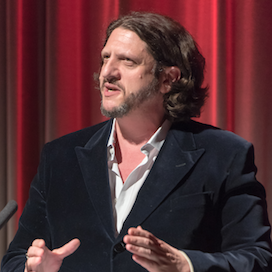 The Kitchen Cabinet host, critic and sometime Masterchef judge is “a greedy man in a hungry world.” Alongside reviews he also likes to slay sacred cows, like the cult of farmers’ markets. As well as a serious look at the food industry, what we eat and why, and the resillience of the restaurant sector, Jay dispenses his view on service and food fads and dips into his one man theatre show My Dining Hell – examining why we’re all so keen to read lousy restaurant reviews.

Jay Rayner is a journalist, writer, broadcaster and food critic. He is perhaps best known for his Observer restaurant reviews and food column, as well as his Radio 4 show The Kitchen Cabinet and regular appearances judging dishes on MasterChef.

A contributor to a wide range of publications including GQ, Cosmopolitan and the New Statesman, Jay has written for both Gourmet and Saveur in the US. His feature writing is regularly syndicated across the world, and has been translated into more than a dozen languages. He is a past winner of Young Journalist of the Year, and Critic of the Year at the British Press Awards. He has also written a number of fiction and non-fiction books, the first of which was shortlisted for the Author’s Club First Novel Award.

As a critic, he regularly pops up on Masterchef, appeared on two series of the American show Top Chef Masters, has reported for The One Show, and is a part of the panel on Tried and Tested, Channel 4's food review show. He has toured his one man show across Britain, Australia and New Zealand, and hosts Radio 4’s off-beat food panel show, The Kitchen Cabinet.

Jay combines both a serious look at the food we eat, how it's produced and sold, and the nature of the food and hostpitality industries, with wit and entertaining anecdotes. He considers the power of the critic but also the resilience and creativity of the restaurant sector. He also speaks candidly about the importance of good service, and the perils of resembling Marco Pierre White. Following the success of his book Greedy Man In A Hungry World he continues to explore food industry issues, and the global impact of predicted food shortages.

“The audience reaction was extremely positive.”

Jay is everything you need in an after dinner speaker - perhaps it's years of entertaining dining companions. He’s eloquent, easy going and comes with a store of anecdotes about life as a restaurant critic (aka "going out to eat and writing smart-arsed things about it"). JLA Agent Anthony Assadourian