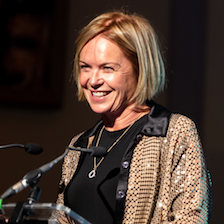 Mariella has moved from film review to Panorama and writing about menopause. She has also served as agony aunt on The Observer and has interviewed luminaries of stage, book and screen from Oliver Stone to Kermit the Frog.

Mariella Frostrup is a writer and broadcaster, widely seen as an intelligent and accessible commentator on culture, arts and society. She has interviewed some of the biggest names in film, music, literature of politics from Paul McCartney to Kermit the Frog, Salman Rushdie to Desmond Tutu. She is now a lead presenter on Times Radio where she hosts a daily look at news and society.

Born in Oslo and raised in Ireland, Mariella moved to London whilst stil a teenager, eventually working in music PR and ending up dealing with Live Aid and Band Aid. That led to a break in TV on Channel 4’s music show, Big World. Since then she has rarely been off the small screen with a succession of music, film and culture programmes. She’s also cropped up on everything from Have I Got News… to The One Show, Question Time to Shooting Stars to Panorama as well as guest appearances on Absolutely Fabulous and Coupling.

For almost 20 years Mariella was the host of Radio 4’s long-running Open Book, in which she reviewed works by, and interviewed some of the world’s leading contemporary writers. She also fronted Mariella's Book Show (previously The Book Show), Objects of Desire, The Big Painting Challenge and Britain's Novel Landscapes. She is also an advocate for tackling the ignorance around the menopause, presenting the documentary The Truth About The Menopause for the BBC and writing her guide to Cracking The Menopause.

An accomplished writer and journalist Mariella has written for many newspapers and magazines including the Guardian, Vanity Fair, the Mail on Sunday, the New Statesman, Harpers & Queens, and she is the author of a hugely popular agony column for the Observer. She has also judged awards including the Booker Prize, the Orange Price for Fiction, the Stirling Prize, the Turner Prize and the London Film Festival. Amongst a number of charities and causes she supports she is a Trustee of The Great Initiative; a charity which promotes gender equality, a Save The Children’s Gender Ambassador, and an active part of Comic Relief.

Wonderful to work with, friendly and professional throughout. The audience were impressed she had done her research.