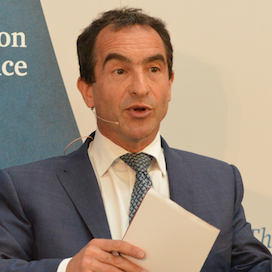 Having established, led and then sold his New Energy Finance business to Bloomberg, where he continued to serve as its CEO, Michael is a world-leading authority on the intersection of business, regulation and climate change. He examines key questions related to the future of sustainable energy, infrastructure, battery technologies and how industries will need to adapt.

Michael Liebreich is a leading figure in the business of sustainability, clean energy, climate finance and smart infrastructure. Having founded his own clean energy investment and research company, he now advises companies, NGOs and governments around the world. He is also a Senior Advisor at Sustainable Development Capital, an investment business specialising in areas of clean energy and improved energy efficiency.

Michael is an authority on the intersection of business, regulation and climate change. He looks at the threats to current models, and the opportunities for all to develop new, better systems and products. He considers vital developments in battery technologies, the application of clean energy particularly in transport, and the future of hydrogen-based power. He examines the potential move away from fossil fuels by the big energy companies and a world where 50% of electricity is generated by wind and solar. He analyses the financial realities, the potential costs of action and of inaction, and how industries from commodities to construction to cars will change.

The founder and CEO of New Energy Finance, Michael sold his innovative advisory company to Bloomberg. He served as CEO of Bloomberg New Energy Finance before becoming Chairman of the Advisory Board and later a Senior Contributor.

Michael has served on the advisory group to the UN Secretary General’s Sustainable Energy for All initiative, and was a member of the World Economic Forum’s Global Agenda Councils on Sustainable Energy. Amongst many advisory and board roles, Michael has worked with Transport for London, the UK Department for International Trade’s Capital Investment Advisory Board, WWF Switzerland, the OECD Centre on Green Finance, the Clinton Global Initiative, and the Advisory Board of Shell New Energies. He has also been a Visiting Professor at Imperial College’s Energy Futures Lab and advised the college’s Masters programme in Climate Finance and Management. He has provided evidence and expert testimony to a number of US Senate, British and EU Parliamentary groups, and has spoken at the UN General Assembly.

Before establishing New Energy Finance Michael had a career in business and investment that incorporated senior roles in media companies, venture capital businesses, and at McKinsey & Co. His own investments have ranged from electric vehicle charging to solar power projects to software coding. Before pursuing business full-time he was a member of the British Ski Team, competing at World Cup and Olympic level.