The former Assistant Editor for The Times and Newshour presenter explores the unconscious bias that underestimates and overlooks half of the population in her book The Authority Gap. From children to high-achieving leaders her research highlights how women continue to be seen as lesser, despite girls consistently outperforming boys in education and gender-diverse companies being more profitable.

Mary Ann Sieghart is the former Assistant Editor of The Times and author of The Authority Gap: Why women are still taken less seriously than men, and what we can do about it. At The Times she was Acting Editor of the Monday edition, Op-Ed Editor, Arts Editor, Chief Political Leader-Writer and political and social affairs columnist both on the Op-Ed page and in Times2. Since then, she has written a weekly column in The Independent and presented Newshour, the BBC World Service’s flagship news and current affairs programme.

She started her career in journalism early, working at The Sunday Express and The Daily Telegraph during the holidays while studying at Oxford. She went on to be the political correspondent of The Economist, City Editor of Today newspaper and a Lex columnist and Eurobond correspondent at the Financial Times. Since stepping back from The Times, she works as Non-Executive Director of the Guardian Media Group, make programmes for BBC Radio 4 and is a Visiting Professor at King’s College London.

Mary Ann’s book, The Authority Gap, deals with the cognitive biases that continue to favour men over women when it comes to roles of leadership and authority. The book explores data showing that female US Supreme Court Justices are cut off four times more often than their male counterparts, almost always by men, and the difference in vocabulary used to describe strong men and women in authoritative positions. She interviewed a range of esteemed female public figures, from Baroness Hale and Mary Beard to Bernadine Evaristo, to highlight that if women at the very top of their profession can be undermined, women everywhere are likely to experience the same foul play. In speeches, as in her book, Mary Ann exposes the unconscious biases and provides potential answers and ammunition to demand change using objective evidence.

Alongside her journalism, Mary Ann has extensive TV and radio experience including presenting The World This Week and Start The Week, chairing BBC2’s revival of The Brains Trust and appearing regularly on shows such as Question Time and Any Questions. She also captained The Times’s University Challenge: The Professionals team, which reached the semi-final. She has also sat on a number of boards and councils, including the Tate Modern and the Heritage Lottery Fund, and been Chair of the Social Market Foundation, a non-party-political think tank. 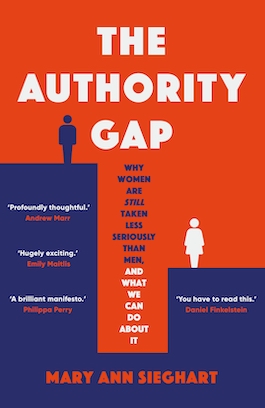