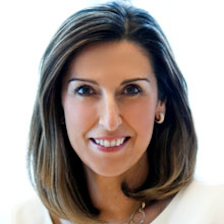 In a career that has consistently seen her at the forefront of new innovations, Inma combines having worked in finance and telecoms with leading projects in everything from media streaming to mobile data, space, AI, and connected living. An entrepreneur, researcher, author, commentator and advisor she also serves on the Innovation and Commercialisation and the Future of Work task groups of the multi-governmental Global Partnership on Artificial Intelligence.

Inma Martinez was billed by Fortune and Time magazines as one of Europe’s foremost talents in the field of human factors and social engagement through technology. She is acclaimed as one of the most influential women in technology having started out in the early mobile data industry and going on to work in areas incorporating AI, smart cities, fintech and cutting edge science. As well as focusing on the use of data to model human behaviours and affect attitudes she is a partner at Deep Space Ventures, which unites scientific talent with new commercial opportunities.

Inma co-founded and led two more companies. Sense Worldwide helped the likes of the BBC, Nokia, Hewlett Packard, Channel 4, and Unilever understand future trends. Whilst Visual Radio in Finland, which was later sold to Nokia, was a pioneer in making mobiles more than just a device for calls and texts. Imna stayed with Nokia working in product innovation before becoming a consultant working in cybersecurity and e-commerce. Over the course of her career Inma has been involved in the early development of hugely influential technologies including media streaming, smart living devices, connected urban environments, and sensor-based data.

Whilst continuing to advise businesses on how the world is being disrupted by digital, Inma also serves on the Innovation and Commercialisation and the Future of Work task groups of the multi-governmental Global Partnership on Artificial Intelligence. She has also advised UK, Spanish and Malaysian government departments and has held executive advisory positions at HP, LG, Nokia, the European Union Technology Commission, the UKTI China Mission, and Sport England. Inma is the author of The Fifth Industrial Revolution: How Space Commercialisation Will Derive The Biggest Industrial Expansion of the 21 st Century, and has lectured on three separate Masters' courses at Imperial College Business School, and also at Madrid’s digital business school, ISDI.