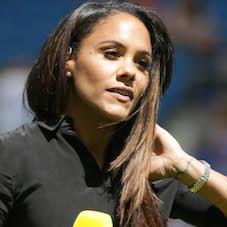 After captaining Arsenal and playing over 100 matches for England, Alex is now one of the best-known faces in sports broadcasting. She's broken down barriers to become the first woman to commentate on men’s international and club matches for the BBC and Sky respectively. She has also hosted a game show, coverage of Tokyo’s Olympics and The One Show.

Alex Scott is a sports broadcaster and presenter, a former captain of Arsenal and former England defender who made 140 appearances for the national team. One of the best known figures in women’s football, she’s a pundit and presenter covering both the men’s and women’s game for the BBC and Sky, including presenting BBC One's Football Focus.

Signing with Arsenal as a schoolgirl, Alex helped the team become one of the most successful in recent history. She was a key part of the teams that won nine league titles and seven FA Cups, including the historic ‘quadruple season’ in which the north London club won all of their cup competition. She even scored the winner in the final of the equivalent of the Champions’ League for the women’s game. Alex also became the second-most capped England player, appearing at European and World Cups, as well as playing in the 2012 British Olympic team.

Since retiring from playing, Alex has built a broadcasting profile that has seen her become one of the most recognisable faces in football coverage. A regular on the BBC’s Final Score and Match of the Day, she was the first woman to commentate on a men’s World Cup match for the BBC. She became the first woman pundit to cover the men’s game on Sky Sports, where she also took on co-hosting duties on their Goals on Sunday highlights show. She’s contributed to coverage of club and international games in both men’s and women’s competitions, and has won the RTS Sports Commentator award. Aside from football, she was also a lead presenter for the BBC's coverage of the 2020 Olympic Games.

Away from sport Alex has competed in Strictly Come Dancing, guest hosted The One Show, and was a part of ITV’s Bear Grylls: Mission Survive. Alongside supporting various charities and projects, including the Premier League Plastic Pollution Challenge, Alex is committed to growing the profile of and participation in women’s football at all levels, including through her academy in south west London which promotes achievement on the pitch as well in the classroom.