Having covered politics for over 20 years for the BBC, in print and on the live stage, Steve examines events in Westminster with wit and an insider’s knowledge. A presenter of Radio 4’s Week in Westminster, he is also the author of The Rise of the Outsiders and Prime Ministers: Reflections on Leadership. He's presented TV and radio series profiling British PMs and their achievements. His successful Rock N Roll Politics stage show regularly sells out in London and the Edinburgh Fringe, and the accompanying podcast also presents his original take on British politics, its absurdities and dramas with insight and humour.

Steve Richards is an award-winning political commentator and journalist. He’s a regular on TV, radio and in print, as well as on live stages around the country with his Rock N Roll Politics show.

The Independent’s chief political commentator for over ten years, Steve made frequent appearances as a panellist with Andrew Neil on BBC One's Sunday Politics and This Week. He’s presented Radio 4’s Week in Westminster and What The Papers Say, and hosted the station’s political quiz Parliamentary Questions. He has fronted GMTV’s Sunday Programme and BBC2’s Despatch Box, has been a regular on the BBC News Channel’s Head 2 Head, and has written and presented documentaries on Tony Blair, David Cameron, Nick Clegg, and Ed Miliband

Before joining The Independent, Steve started out in regional journalism and broadcasting followed by five years as a BBC Political Correspondent, and then serving as Political Editor of the New Statesman. As well as The Independent and its Sunday sister, he has also written for the Evening Standard, The Spectator and The Guardian.

In addition to journalism and broadcasting, Steve has authored several books on British and Western politics. Whatever it Takes provides a critical insight into the strange world of the Gordon Brown government, plotting the rise and fall of one of the most complex figures in recent political history. The Rise of the Outsiders: How Mainstream Politics Lost its Way is a timely examination of populism, reviewing how the extremes and fringes of politics gained power and influence around the world. Steve’s third book, The Prime Ministers: Reflections on Leadership from Wilson to May, looks at the leaders that have defined the UK’s position in the modern world – what they achieved, where they failed, and what we can learn from each one.

Steve has toured the country with his widely praised one-man Edinburgh Fringe show, Rock N Roll Politics. The show, and its successful podcast incarnation, is a comedic tour around Westminster - the key players and behind-the-scenes events, and serves as an ‘anti-satire’ defence of politics and politicians.

As a columnist and presenter Steve has interviewed all the major political figures in Britain over two decades and many of his interviews have made front-page news stories. He takes a wry but informed look at the nation’s and the world’s leaders, sharing political gossip, revealing the plots and intrigues, and throwing in a few choice impressions along the way.

“Just brilliant. Feedback has been terrific.” 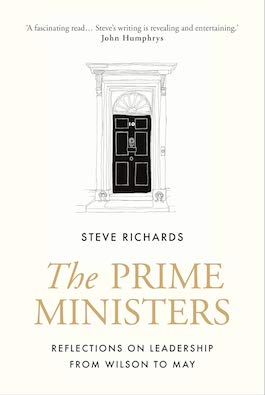