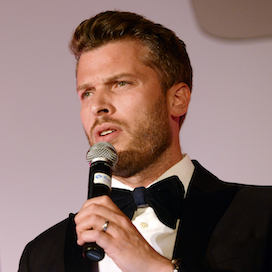 From his early days acting and hosting T4, Rick is now one of the most versatile presenters around. As well as hosting BBC 5 Live's breakfast show, his credits include Paralympics coverage, documentaries, quiz shows and science podcasts.

Presenter, DJ and erstwhile Hollyoaks extra, Rick Edwards has also added writer, radio host and podcaster to his list of credits. Hosting quiz and entertainment shows, documentaries, sports coverage and podcasts covering everything from science to politics, he’s one of the most versatile presenters around. As well as hosting BBC 5 Live's breakfast show with Rachel Burden, he fronts the game show Impossible and the US dating show The Courtship.

Whilst studying natural sciences at Cambridge, Rick performed stand-up and in sketch shows before becoming a regular face on T4 and E4. He went on to host Channel 4’s groundbreaking coverage of the 2012 Paralympic Games, as well as That Paralympic Show. He also fronted a BBC documentary on the Oscar Pistorius story, as well as other factual shows on kidnapping and food before hosting youth-focused political programme Free Speech. Rick went on speak at TEDx Houses of Parliament with his well-received speech entitled ‘How to get young people to vote.’ His political interests led him to write his first book, None of the Above, an analysis of why people should vote and how to encourage them to do so as a counter to other, more sceptical voices.

Returning to his love of science, Rick hosts the podcast Eureka! with Dr Michael Brooks dissecting the scientific mysteries of the world.The duo also worked together on the podcast Science(ish) where they exmained the intersection of pop culture and science and they have written the books Science(ish) and Hollywood Wants To Kill You, both looking at the real science used (and abused) in films.

Regularly writing on media, young people and politics for the Huffington Post and the Evening Standard, Rick also once penned a monthly fashion column in the Observer Magazine.

‘Slick, really good with the guests - and had photos with everyone.’