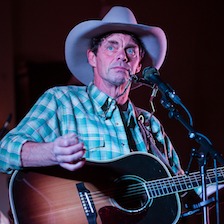 The caustic American has TV credits from Saturday Night Live to The David Letterman Show, and from QI to Stand Up For The Week. Distinctly craggy and seemingly bewildered by the world, Rich picks out some differences between Brits and our Americans cousins – paying fulsome tribute to the Royals.

The deadpan American comic Rich Hall quit his job as a hurricane namer for the United States Meteorological Service eighteen years ago, and hasn't looked back. Spending most of his time in London, he likes to lay into his fellow countrymen and life across The Pond at every opportunity.

Combining many of his passions in one BBC series, Rich Hall’s Fishing Show provided the perfect opportunity to pontificate on modern life, pop culture and politics whilst fishing various Scottish lakes. He has also presented How The West Was Lost and Cattle Drive, exploring different aspects of his homeland and how the world (often unfairly) sees it.

In another outpouring of patriotism Rich created award-winning character Otis Lee Crenshaw. In essence, a redneck jailbird singer from Tennessee who has been married seven times, all to women named Brenda. Joined onstage by three musicians, Otis composes songs on the spot about the audience and the headlines of the day. Rich continues the show today, although without Otis, but with just as much wit and love of authentic country music.

He has fronted the BBC Four documentaries Rich Hall’s Red Menace, Rich Hall’s Working For The American Dream, Rich Hall’s Countrier Than You, Rich Hall’s Presidential Grudge Match, Rich Hall’s California Stars, Rich Hall’s You Can Go To Hell, I’m Going To Texas, and Rich Hall’s Inventing the Indian. On the other side he has written for and appeared on Saturday Night Live, The Late Show with David Letterman and Late Night with Conan O’Brien. He is also believed to be the inspiration for the bar-owner Moe in The Simpsons.

In addition, he has appeared on BBC One’s QI, Live At The Apollo and Have I Got News For You, he wrote and starred in his own reoccurring BBC Radio 4 show Rich Hall’s (US Election) Breakdown and has penned articles for The Guardian and The Sunday Times.

Rob Brydon Would I Lie To You?

“He did his homework - lots of material was tailored to the audience.”

Rich Hall Live at the Apollo