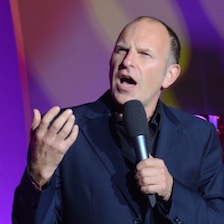 Simon is a regular guest on Radio 4’s News Quiz and The Unbelievable Truth, and expanded his range alongside Tim Harford taking a wry look at economics and money in Simon Evans Goes to Market. With unstinting sarcasm and wonderfully timed put-downs, he targets a whole herd of sacred cows – including the joys of parenthood.

Comedian and writer Simon Evans has established himself as one of the most intelligent and sharp live performers in the country.

His acerbic, sometimes caustic wit revels in his (entirely ironic) sense of superiority over most of the world. Subtle, sarcastic and smart, Simon takes uncompromising aim at life, organisations, and people from the regions. But it’s all shot through with the knowingness and self-deprecation that has made him a regular hit on the UK comedy circuit and at the Edinburgh Fringe and Montreal festivals.

Amongst a host of TV appearances, Simon has been a guest on Michael McIntyre’s Comedy Roadshow, University Challenge: The Professionals, and The Comic Side of 7 Days. He has also been a writer on Lee Mack’s sitcom Not Going Out, 8 Out Of 10 Cats, and for Lily Savage, and was a writer and co-creator of the panel show Argumental.

Simon is a regular on Radio 4, both as a guest and presenting his own shows, including Simon Evans Goes to Market, a wry but informative look at all things economic alongside Tim Harford and Merryn Somerset Webb. Other Radio 4 appearances include the The News Quiz, The Unbelievable Truth and Armando Iannucci’s Charm Offensive.

“Absolutely fantastic, a pleasure to work with and he had the audience in stitches!”