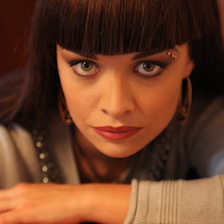 Coming to world-wide public attention on editions of Britain’s and American’s Got Talent, as well as the version in her native Ukraine, Kseniya’s unusual yet beautiful work has seen her perform at international events from sport to fashion, collaborating with orchestras, and becoming an online sensation.

Kseniya Simonova is a sand animation artist who captured attention after winning Ukraine’s Got Talent. She went on to win ‘golden buzzers’ on the US and UK Champions series.

After studying fine art, psychophysiology and graphic design, Kseniya’s husband Igor suggested she try sand performance. When tests with beach and river sands proved unsuitable, he sold his printing equipment to buy a quantity of expensive volcanic sand. Kseniya began to experiment. She found it gruelling, standing for long periods of time and adapting her vision to the strange medium.

Nevertheless she persevered and entered the TV talent contest, which offered a one million hryvnia (US$100k) prize. The audience was moved to tears. As soon as she finished, Kseniya received a spontaneous standing ovation. Within days the Ukrainian YouTube clip attracted 2m views.

Kseniya has since performed in 30 countries and for several royal families. She has opened the international chess tournament in Monte Carlo, launched a Christian Dior exhibition in Moscow, performed at the Champions League Final Gala and created a ‘Long Live The King!’ piece for Princess Sirindhorn of Thailand. She has also interpreted Vivaldi’s Four Seasons at the Sydney Opera House, collaborated with Belgium’s National Orchestra on a special performance of Tchaikovsky’s Nutcracker Suite, and worked with Grammy Award winner Esperanza Spalding on Endangered Species.

Simon Cowell called Simonova "one of the most beautiful acts in the history of Got Talent.” The Guardian proclaimed “If art's purpose is to illuminate the world in a new way, her work is a huge success.” But perhaps this blog puts it best: “Images develop like photographs in a dark room – splotches of colour, suggestions of shapes, and then finally the triumph of delicate shading, intricate detail and whimsical splashes of life.”