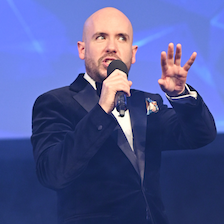 An award-winning comic with a well-spoken but often scathing line in put-downs, stories and observations, Tom discusses wave machines, manners, marriage and “occasional” chairs. As a presenter, Tom teases home bakers and budding entrepreneurs and rummages around our towns.

A household name with his signature acerbic wit and riotous storytelling, comedian Tom Allen is a star on both stage and screen. Since winning the BBC New Comedy and So You Think You’re Funny awards in his first year as a standup, Tom has gone on to perform around the world, and supported Michael McIntryre, Sarah Millican and Romesh Ranganathan.

Mixing storytelling, withering remarks and well-crafted jokes, Tom delivers a carefully curated combination of pithy observations and ironic hubris. Finding sometimes unlikely humour in leisure centres, the institution of marriage, and the school gym, with impeccable timing he leaves audiences hanging on the eyebrow he’s raised in anticipation of the punch line.

His Absolutely tour was extended multiple times, selling over fifty-thousand tickets, including an unforgettable sold-out show at The London Palladium which was filmed and broadcast on Channel 4.

Tom is the host of The Apprentice: You’re Fired, co-host of Cooking With The Stars, and is also a regular on Bake Off: An Extra Slice. Other television appearances include Live at The Apollo, A League of Their Own, 8 Out Of 10 Cats, Would I Lie to You, The Last Leg, QI, The Jonathan Ross Show, and The Royal Variety Performance.

He’s also often appeared on Radio 4 institution Just A Minute, and proved a surprise hit when co-commentating on matchday coverage from Charlton Athletic for Sky Sports as part of the Rainbow Laces campaign. Tom co-hosts the podcast Like Minded Friends with fellow comedian Suzi Ruffell.

In his critically acclaimed Sunday Time bestseller memoir, No Shame, Tom recalls observations on childhood, his adolescence, the family he still lives with, and his attempts to come out and negotiate the gay dating scene.

“An excellent host and consummate professional”