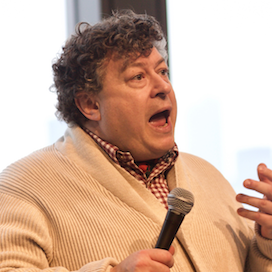 One of the most respected creative thinkers in the ad industry, Ogilvy’s Vice-Chairman once suggested to Microsoft that they enable people to share office documents on the internet. The idea was dismissed but Rory has gone on to build a career out of the counter-intuitive and the original. With a sharp wit he examines what influences our choices and why irrational thinking tends to win out.

Rory Sutherland is the Vice-Chairman at media and ad company Ogilvy UK. Combining creative thinking with a passion for behavioural science he examines why people think, buy, vote or act the way they do, what influences them, and why they're so frequently irrational in their choices. Widely considered one of the leading real-world practictioners of behavioural science, he looks at what can be learned about the responses and reactions of employees, customers and the public and how that can guide the future of business and society.

After a spell teaching at a grammar school (and finding his colleagues far more challenging than the pupils), Rory applied to a number of advertising and marketing agencies and was offered a planning role by Ogilvy & Mather. He was asked to leave the Planning Department and moved to the Creative Department instead as a junior copywriter. He worked on accounts including American Express, Royal Mail, and the relatively obscure software company Microsoft.

Despite approaching Microsoft with the idea of a system whereby people could share Office documents over the nascent internet and being roundly rejected, Rory went on to help found OgilvyOne, the group’s dedicated digital and direct agency. He remains an advocate of so-called ‘360 Degree Branding’ ensuring brands have a coherent, joined-up presence in all relevant media areas. Rory was appointed Head of Copy, and shortly afterwards Creative Director of Ogilvy. He has also served as the president of the Institute of Practioners in Advertising (IPA) - the first ‘creative’ to do so. Ogilvy is now part of the massive WPP ad and media group and count Ford, Unilever, IBM, American Express, BP, and British Airways amongst their top accounts.

Now as Vice-Chairman, Rory shares his passion for psychology, behaviour and thinking differently with colleagues, clients and the wider world. He is the founder of Nudgestock, the global festival of behavioural science, and the author of Alchemy: The Surprising Power of Ideas That Don't Make Sense, examining the increasing role of the irrational in decision making.

With characteristic wit and erudition Rory looks at the successes, the failures and the outright bizarre from the world of advertising and commuincations, and asks 'why?'. He analyses what branding means, what creativity is, and the value of persuasion over compulsion. In particular he looks at why individuals and groups, consumers and employees, often make the unexpected or 'wrong' decision, when that choice can be changed, or when it actually shows us the way to go.

Author, How To Have a Good Day

As Creative Director of one the most successful ad agencies in the world, Rory wouldn't be out of place in a modern day version of Mad Men. You'll warm to him straight away. He overturns your assumptions, lets you in on branding secrets, and shows how human behaviour isn’t always logical – wrapping it all up with an easy humour and bundles of charm. You’ll come away buzzing with insights and ideas, and a knowing smile. JLA Agent Scarlett Atherton 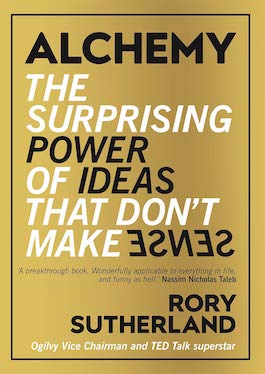