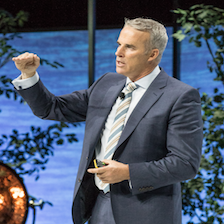 Lewis is the first to complete long distance swims in each of the world’s oceans. He has also swum in Arctic and Antarctic waters, and the length of the Channel. His aim is to raise global awareness of a fragile maritime environment – one with retreating glaciers and increasing levels of plastic pollution – and he has negotiated official protected status for over two million square kilometres of ocean (equivalent to the size of Western Europe). As well as highlighting the urgent plight of the world’s seas, Lewis also reflects on his mindset and the vision, preparation and teamwork required when undertaking his marathon swims.

Lewis Pugh is a swimmer, environmentalist and former maritime lawyer. He has pioneered distance swims in all of the world’s oceans, the ancient Seven Seas, and inland waters including the Thames, Lake Malawi, and in one of the glacial lakes on Everest. Along with his 12 miles-a-day, 49 day swim of the length of the English Channel, he is probably best recognised for becoming the first person to undertake a long distance swim at the North Pole. He has also broken the record for the most southerly swim with five swims in the Antarctic and is the first person to complete long-distance swims in every ocean on the planet.

An ‘ocean advocate’ Lewis combines a passion for raising awareness of the effects of climate change and pollution with a determination to take on seemingly impossible challenges. He vividly describes preparing to undertake potentially life-threatening expeditions, his mindset and motivation, overcoming negative thoughts as he stares into the complete blackness of the Arctic waters, and how he keeps going once he’s started. He also reflects on both success and failure, risk, the importance of the strong team behind each swim, how a high performance culture is shared and goals achieved. All this accompanied by stunning, inspiring images of frozen landscapes.

In swimming some of the toughest, coldest waters in the world, Lewis has gained a unique perspective on climate change, having witnessed retreating glaciers, decreasing sea ice, coral bleaching, severe droughts, the increasing presence of plastics, and the migration of animals to colder climates. As a result of these experiences, he is determined to raise awareness about the fragility of our environment and to encourage everyone to take action. His work in and out of the water has brought these issues to public and political attention. He has played a key role in realising the official protection of vulnerable oceans. He has negotiated Marine Protected Area status for over two million square kilometres of ocean, equivalent to the size of Western Europe, and aims to increase that to a third of the world’s oceans by 2030.

As a United Nations Patron of the Oceans, Lewis has shared a platform with high-profile politicians and campaigners to deliver first-hand accounts of what is happening in some of the world’s most fragile ecosystems and to push for government action and legislation to protect these regions. He has been named a Young Global Leader by the World Economic Forum and as one of National Geographic’s Adventurers of the Year.

70th Anniversary of the Commonwealth 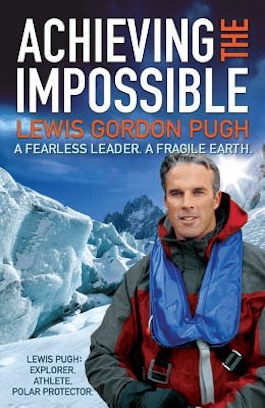