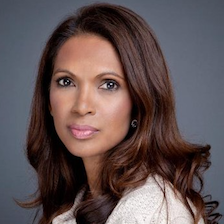 Best known for her legal challenge to the Government’s plan to invoke the UK’s departure from the EU without a Parliamentary vote, Gina has become one of the country’s most high profile campaigners. As well as Brexit she has commented and campaigned on the transparency of pensions and investment advice (she is the co-founder of an investment company) as well as on social and equality issues. Having worked in marketing and in financial services, she is also the author of Rise: Life Lessons in Speaking Out, Standing Tall & Leading the Way, and has been named as Britain’s most influential black person.

Gina Miller is an entrepreneur and activist. She has taken the government to court twice and won, and has led campaigns around Brexit, modern day slavery, pension reform, and responsible capitalism. She is the author of Rise: Life Lessons in Speaking Out, Standing Tall & Leading the Way and discusses social justice, equality, politics and corporate transparency.

From supporting herself as a teenager to facing abuse at law school, Gina has used her experiences to speak out against injustice and become one of the most influential activists in the UK. Together with her husband, Gina founded SCM Direct, a wealth management and investment company born out of the financial crisis, which advocates for transparent practice and ethical investment. Gina led a number of campaigns over the politics and implementation of Brexit. Most notably, she took the British government to court over its right to implement Brexit without the prior approval of Parliament. She also challenged the government’s extended prorogation of parliament, and founded a number of anti-Brexit movements.

With a life of fighting injustice, challenging power, and dealing with trauma, Gina discusses social equality and justice, resilience and dealing with failure, and finding and using one’s voice. She looks at the intersection between business, politics and the influence of the wider society, considering matters like corporate accountability, financial scrutiny, political reformation and safeguarding.

Having built and led a business based on equality, respect, purpose and belonging, Gina looks at the considerations and processes required to understand and embrace workplace diversity, and to get the most out of a diverse team. She also discusses her personal experiences of misogyny and racism in business, as well as how she dealt with threats and abuse in person, in the press, and on social media.

Amongst many media appearances Gina has been a guest on Question Time, Newsnight, BBC World Service, Sky News and Radio 4’s Any Questions. She was the founder of the True and Fair Campaign and Foundation, which worked to expose financial misconduct in the investment and pension industries. She is also an ambassador for the Desmond Tutu Foundation, which provides treatment for and conducts research into HIV/Aids.