Noted as one of the leading economic voices in the Labour governments of the 1990s and 2000s, Ed was a key architect of policies from the independence of the Bank of England to the minimum wage. Having left politics he now has roles at Harvard and King’s College alongside a new life encompassing everything from Strictly to chairing Norwich City FC. As well as insights into Europe, populism, and economics he reveals a lighter look at Westminster and his career.

Ed Balls served as Economic Secretary to the Treasury and Shadow Chancellor in a political career spanning over two decades. Away from politics he has found a new audience with a surprisingly successful appearance in Strictly Come Dancing, and a revealing exploration of US voters in Travels in Trumpland.

After a period teaching at Harvard, Ed returned to the UK and joined the Financial Times as a leader writer. He remained at the FT until then Shadow Chancellor Gordon Brown employed him as an advisor. When Labour entered government in the 1997 election Ed became Chief Economic Advisor to the Treasury. Upon election to Parliament, he became Economic Secretary to the Treasury, continuing his working relationship with Chancellor Gordon Brown.

Ed was a central part of the Labour economic plan which was key to the party’s success from the mid-90s onwards. He was an architect of policies including the independence of the Bank of England, the national minimum wage, tax credits, and the five economic tests for UK entry into the Euro. Throughout his time with the Treasury and beyond he was noted as one of the sharpest, most forceful and most influential economic minds. When Brown became Prime Minister, Ed was promoted to a full cabinet post as Secretary of State for Children, Schools and Families, until being appointed Shadow Home Secretary and then Shadow Chancellor. However, Ed famously lost his Parliamentary seat in the 2015 election.

Having left politics, Ed has found himself with a new public role. Along with his positions as a Senior Fellow at Harvard and a Visiting Professor at King’s College London, his performances on The Great Sport Relief Bake Off and Strictly Come Dancing have revealed a different side. Open, self-deprecating and entertainingly honest, he has been frank about life after politics, his personal passions (including Norwich City FC, of which he is Chairman), and his struggle with a stammer. As well as providing a serious look at areas such as populism, social media and dealing with crises, and an analysis of the economic and political outlook at home and abroad, he also reveals behind the scenes of Westminster, Strictly, and how he marks Ed Balls Day.

Ed has presented a number of BBC documentaries, and has appeared on various shows such as The Andrew Marr Show, Newsnight, Question Time, Daily Politics, Have I Got News For You, QI and Would I Lie To You?

“He was received very well by our audience and we are really grateful for the additional time Ed spent with everyone before and after his session.” 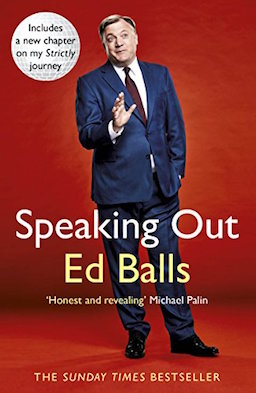