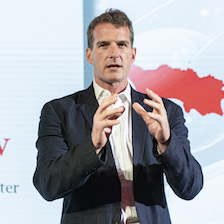 Lloyd George’s great-great-grandson has filmed in famous battlefields and fronted documentaries on the Grand Canyon, Congo and railways.

Author, broadcaster and presenter Dan Snow is the BBC’s ‘history man’ and the presenter of the podcast History Hit. He puts everything from leadership to innovation to global politics and Brexit in a historical context.

Together with his father Peter, Dan presented the BAFTA award-winning BBC series Battlefield Britain. There followed a number of World War II series, as well as broader programmes on London, the Battle of Trafalgar, America, and the Ark Royal. He’s also the ‘History Hunter’ for The One Show.

As well as history, Dan has covered many live events, often with a military link, like Trooping the Colour and commemorations of the Falklands conflict, as well as current affairs programmes including Who Really Owns Britain and What Britain Earns. One of the BBC’s most popular factual broadcasters, during the course of his career Dan has been gassed, set on fire, trained as a sniper, and contracted hypothermia. He also launched the first handheld video guides to London and is the author of a number of books including On This Day in History, a compilation of significant, but often lesser-known, historical dates.

As well as looking at the history of almost any place, group or industry, Dan also considers the causes, consequences and evolution of innovation. He examines the circumstances of the industrial revolution and the factors that made Britain uniquely suited to encouraging developments (from patent law to natural resources). He also looks at examples such as the printing press and the railway, at first feared and unregulated; they spawned rapid changes in society and were eventually subject to strict government controls. By analysing history, Dan discusses the probable futures of everything from the tech giants to air pollution to the ethics of AI.

Considering other aspects of history Dan finds lessons in leadership from the likes of Alexander The Great, Genghis Khan, Napoleon and Margaret Thatcher. He dissects the evolution of what people think of as leadership, and the qualities different circumstances call for, whether it’s inspiring devotion or strategic thinking. He compares current figures like Greta Thunberg to historical ones like Joan of Arc, and highlights how political and social division has always existed across the UK and beyond, from the Civil War to The General Strike. He also looks at the cyclical nature of Britain's relationship with its neighbours which has seen the country expand into and influence Europe at certain points, but then throw up defensive walls and look inwards at others.

Escape to the Chateau

“Everybody went away feeling that not only did they learn something from the past, but also came away with food for thought for the future.”