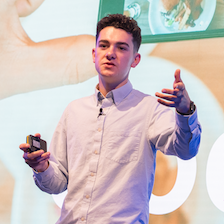 Starting his web design business aged just 11, Ben was running a company by the time he was studying for his GCSEs. Before he was 18 he was running a fully fledged online, branding and social media consultancy and was feted as the future of British business. Having exited his first business and started his next, he provide insights in to the social media landscape (he’s roughly the same age as Google) and the future of business. He considers what’s new and what challenges businesses are going to have to face from disruptive competition to employee wellbeing.

Ben Towers is an entrepreneur who started his own web design company at the age of just 11. He grew and developed his businesses into a thriving social media consultancy. Ben later exited the business following a multi-million pound merger with another agency where he served as a director before launching a new venture. All before he was 20. Widely acclaimed by the British business community, he’s been named NatWest Entrepreneur of the Year and dubbed one of the UK’s most exciting entrepreneurs by Sir Richard Branson.

After designing a website for a family friend for £50, Ben balanced schoolwork with managing a growing web design business. Facing some unusual challenges, such as his children’s bank account being frozen because of the number and size of transactions going through, and having to study for exams and fire a member of staff for not responding to clients, Ben was running a fully-fledged SME with a team of 26 before he was 18. Working on campaigns for companies including QuickBooks, Pot Noodle, Champneys and Virgin, he had to decide between focusing on his business or taking his A Levels. Ben compromised and became the first person to employ themselves as an apprentice in his own business - which meant having an employee review his work.

After leaving the agency, Ben became an advisor and Communications Director at pharmaceutical giant GSK, a mentor to new entrepreneurs, and an investor in a range of startups. He topped The Times’ global Super Teen Power List, and was an advisor on the CBBC series Pocket Money Pitch (a Dragons’ Den for young entrepreneurs). Ben is an advisor to the Royal Family, supporting digital initiatives and entrepreneurship programs. He was also appointed by the UK Government to lead on the Innovation and Entrepreneurship review and strategy with the Department for Business.

Ben’s latest venture is Tahora.com, a global culture and wellbeing platform that aims to improve work through a focus on inclusivity, engagement and employee happiness. The project brings together Ben’s passion for business, support for mental health awareness, and his drive to use technology for positive change and to connect people.

Alongside his unusual entrepreneurial story, Ben also speaks about the wider world of technology from the view of someone who has effectively known little else. Frequently, his youth (he’s 25 days older than Google) has provided him with a keen insight into what’s new, what’s fading from popularity, and who’s doing what on which platform. He can bring together the complexities of business and commercial decisions with the demands and expectations of a new generation of employees and consumers, predicting new opportunities and potential challenges.

Josh Valman The Future of Innovation

“On message, interesting and unique”