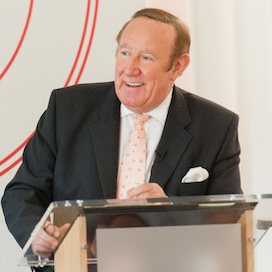 With wry humour added to genuine insight and an enviable network of business, economic and political connections, the publisher, businessman and broadcaster considers the plots, policies and personalities making the news.

Andrew Neil is a publisher, writer, businessman and broadcaster. He is Chairman and Editor-in-Chief of Press Holdings, owner of The Spectator and various titles around the world. On-screen he has regularly scrutinised Westminster and leading figures across politics on shows including Daily Politics, Politics Live, This Week and his own self-titled interview show where he questions decision-takers and news-makers from across the political spectrum. Off-screen he is Chairman of ITP, the large, Dubai-based magazine publisher. He's also Chairman and co-owner of World Media Rights, an international factual television producer.

Starting out working in local journalism Andrew then became an advisor to the Secretary of State for the Environment in Edward Heath’s Government. He then joined The Economist, initially reporting from the US as White House correspondent in Washington and Wall Street correspondent in New York.

Andrew returned to the UK as British Editor of The Economist before becoming Editor of The Sunday Times. At the same time, he was appointed Executive Chairman of Sky Television, overseeing the satellite broadcaster’s launch which would revolutionise the UK media landscape. He also served as Executive Editor at Fox Television News in the US, and later published Full Disclosure, an autobiography of his time in the Murdoch organisation. He would repeat his experience in disrupting the broadcast media landscape with the launch of GB News.

A respected, versatile broadcaster and opinion leader, Andrew is at the forefront of international media, business and political commentary. He’s fronted coverage of politics at home and abroad on Sunday Politics, BBC Parliament’s Politics Europe and Daily Politics, and brought a dry wit and incisive take on politics and politicians on This Week. Andrew has reported for programmes as diverse as Tomorrow’s World and Radio 4’s Today programme, was a member of the International Advisory Board of Al Jazeera and Publisher of The Scotsman Group of newspapers for 10 years.

The recipient of many prestigious awards in journalism, he has been consistently named one of the country’s best broadcasters and forensic interviewers by his peers, by MPs and by various publications According to The Times, the ultimate test for measuring whether a party leader was fit to be Prime Minister, was to put them in front of Andrew Neil.

“A lively and thoughtful presentation – an excellent closing session for the conference.”

Andrew's knowledge of business and politics is encyclopaedic. He not only ‘gets’ speaking briefs, he’s also extremely useful to have onside. And he runs a very tight ship as a moderator, lightening the mood whenever he finds the opportunity. The result is that Andrew’s sessions become the creative spaces they’re meant to be – a million miles from Death by PowerPoint. JLA Agent Tom Disley