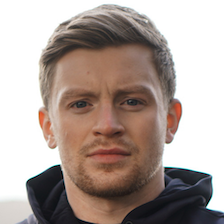 Peaty became Britain's first swimmer to maintain an Olympic title in 2021 when he scooped a gold medal in the men's 100m breaststroke. It was the first Gold for Team GB in the 2021 Tokyo Games. Philosophical on the definition of peak performance, Peaty has described an ambition to achieve what he calls 'Project Immortal': a swim so well-executed that it could be said to reach beyond ordinary human capability and which is virtually unbeatable. Peaty specialises in breaststroke. He claimed the 2016 Olympic title in the competition, becoming the first man to go 57 seconds, then 56 seconds, in the 100 metre.

He holds 19 out of the top 20 fastest times for the 100-metre breaststroke, having broken that World Record 14 times. In the 2020 Tokyo Olympics, he won Gold once more for Team GB, maintaining his status. Adam later became a contestant on the hit UK TV programme Strictly Come Dancing.

His claim to fame was cemented in the 2015 Kazan World Championships, where he finished in the 50-metre breaststroke at a world-beating time of 26.42 seconds. This made Adam the first British swimmer to win three Gold medals at a single event, as well as the first man in history to clinch the 50m and 100m Breaststroke double.

Born in Staffordshire the youngest of four children, Adam grew up with a fear of water. His first swimming lesson soon put an end to this. Fifteen years later, at the age of 19, he achieved stardom at the Glasgow Commonwealth Games, winning Gold for England.

Adam broke his eleventh world record in the European Championships, with a time of 57.10 seconds in the 100-metre breaststroke, a victory that made him Britain’s first ever three-time quadruple champion.

Adam runs AP Race Clinics. A venture started by Adam and his training partner Edward Baxter, AP Race Clinics aims to teach young swimmers how to race. It tours throughout the UK, providing aspirant young swimmers with the skills they need to improve their techniques, training and the mentality towards racing.

His own personal project goes under the name: 'Project Immortal', which Adam describes as a swim so well-executed that it could be said to reach beyond the limits of even the most elite athletes, and which if achieved, will move the needle indefinitely in his sport.