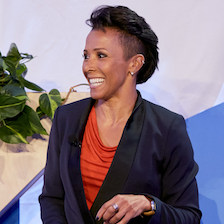 Despite achieving incredible things in her sport, in particular some remarkable comebacks, privately Kelly suffered from serious mental health problems. Her frequent physical injuries also had a psychological effect culminating in a breakdown in the run up the World Championships before her Olympic triumph. It was after retirement that she opened up, one of the first public figures to do so, about her battle with depression, suicidal thoughts and self-harm. Kelly has since become a champion for greater awareness and support in all areas of life.

Though she's only five foot two Kelly's infectious laugh, her bright personality (and her love of the group selfie) could fill a room twice over. The lightness of her storytelling makes you have to remind yourself that she suffered set back after set back before winning her two gold medals. It's her strength in the face of failure that makes Kelly so empowering. You won't just feel a sense of awe, you'll want her to be your best friend too.   JLA Agent Ella O'Kane