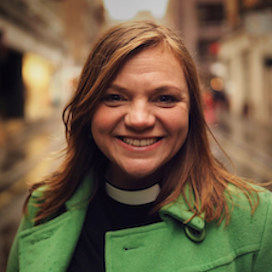 Reverend Kate became a fan favourite on Gogglebox after going viral as the officiate in a wedding flashmob. Taking a break from full-time parish ministry, she presents Good Morning Sunday on Radio 2 and is seen regularly presenting Songs of Praise. She has also made appearances on Celebrity Masterchef, 8 Out of 10 Cats and writes for a variety of publications.

Reverend Kate Bottley is a priest in North Nottinghamshire and a well-loved television and radio presenter. She presents BBC Radio 2’s weekly show, Good Morning Sunday, with Jason Mohammed, is a frequent guest contributor on The Chris Evans’ Breakfast Show and  a regular presenter on Songs of Praise.

Originally from Sheffield, Kate only started going to church because she fancied the local vicar’s son. They are now married and she became ordained to join the church. In 2012, while officiating a wedding, Kate took part in a dancing wedding flashmob. The video went viral with more than seven million hits on YouTube and she was approached by Channel 4’s Gogglebox to join the show. She quickly won the nation’s hearts and began building up an impressive resume of broadcast projects. She has presented BBC Radio 2’s The Sunday Hour, fronted Alone With the In-Laws and In The Footsteps of Judas, a flagship Easter documentary for BBC 1 and journeyed to Camino de Santiago for BBC 2’s The Pilgrimage.

Her warm and personable nature makes her a brilliant host and she goes above and beyond to fulfil briefs and keep audiences engaged and entertained.

As well as her regular appearances, she has also appeared on Celebrity Masterchef, Hairy Bikers Cracking Christmas, The One Show, and 8 Out of 10 Cats and written for a variety of newspapers and magazines including The Guardian, The Independent and Radio Times.

Alex Jones The One Show