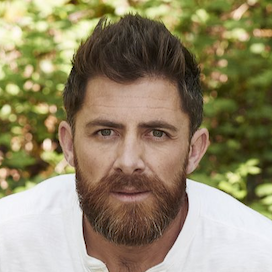 A former Royal Marines Commando Sniper, Aldo used the skills he learnt in service to become a survival expert in every environment. He has provided technical safety advice for dozens of television and film productions and, in front of the camera, has presented adventure shows for BBC, Natural Geographic and Discovery to name a few. He shares stories of abseiling into erupting volcanoes and being charged by a Rhino and the lessons he learnt from his adventures.

Aldo Kane is a former Royal Marines Commando Sniper turned adventurer and television presenter. Behind the screen, he is a go-to in the television and film industries around the world as a technical safety expert in all environments. He has hosted programmes for the BBC, Natural Geographic and Discovery, and taken celebrities including Tom Hardy, Adrien Brody & Henry Cavill into some of the most extreme environments on earth. He also hosts the reality show The Bridge alongside AJ Odudu, guiding the teams across tests of physical ability, mental skill and teamwork.

He joined the Royal Marine Commandos at the age of 16 and went on to become one of the youngest Elite Commando Reconnaissance Snipers in the UK armed forces.  While completing active service in countries from Northern Ireland to the Middle East, he became a survival expert across the different environments he found himself in. He is a skilled mountain leader, skydiver, bodyguard, medic and a professional climber.

As well as working on adventure shows for ITV, Channel 5 and the History Channel, to name a few, Aldo is also the on-screen Expedition Leader for National Geographic’s Natural History series One Strange Rock which sees him lead a team deep inside one of Africa’s most dangerous volcanoes whilst it was erupting. With an inquisitive mind and an extremely unique skill-set, Aldo is well set up for hard-hitting investigative journalism missions. In speeches, he shares stories of when he was held at gunpoint, charged by a black Rhino, rowed across the Atlantic and dived on Captain Kidd’s pirate ship.

Away from the limelight, Aldo also runs a company providing technical safety consultation and risk management for television and film crews operating in remote, hostile and high-risk environments around the world. A Fellow at the Royal Geographic Society, he shares his unique experiences from some of the world’s most dangerous, extreme and remote locations.