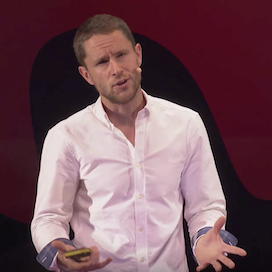 Working for BP for over a decade, Richard has been responsible for a series of innovations with the oil giant, but he has also witnessed first-hand the barriers to and difficulties with innovative thinking in large organisations. His most high-profile project, a personal flight system likened to Marvel’s Iron Man, is just one illustration of his ideas around innovation and why failure is essential to new discoveries and improvements.

Richard Browning’s career has taken in commodity trading, the Royal Marine Reserves, running ultra-marathons, and inventing. It’s in this latter role that he has become known around the world as ‘the real Iron Man’ for his development of a jet powered personal flying system, but it’s just one of a number of innovations he’s been involved in.

An oil trader with BP for over 15 years, Richard was responsible for developing new businesses including in Azerbaijan, Mozambique, Russia, and dealing with many others. Within his role he has a track record of bringing new ideas, including one system inspired from outside the energy industry that enabled the efficient tracking of ships globally and that made BP $50million in three months. He led an internal project to encourage new methods of innovation to take on many of the challenges the energy industry faced. This was done by connecting frontline employees with those challenges and external startups.

After involvement in a number of innovative companies outside BP, Richard put his faith in innovation to a practical test. He turned his love of invention to the dream of human flight. The result, after much (and occasionally painful) experimentation, was the Gravity Project. Likened to Marvel’s Iron Man, Richard created Daedalus, a jet powered suit that became an online phenomenon. With small jets attached to his arms, legs and back, he is able to fly or hover for 12 minutes – an incredible achievement for a something essentially built in a shed.

Gravity has generated interest from companies and investors around the world, including from Silicon Valley. It now looks at how the flight technology can be developed, improved and applied in areas such as search and rescue. Richard’s aim is to build the company into a world class aeronautical engineering business, challenging perceived boundaries in human aviation, and inspiring a generation to dare ask ‘what if…’.

Alongside Gravity, Richard has developed a system being used in Kenya that reconditions old car batteries using solar technology that means they can be used to power school lighting.

Using Daedelus as just one practical example, Richard examines how risk and daring to challenge convention is essential for achievement. He looks at how companies must and can innovate, the necessity for them to embrace risk, and the blockages to innovation within large, established organisations. He asks why, whilst many seek to emulate the brave, responsive, disruptive behaviour of startups, few large companies succeed.

Josh Valman The Future of Innovation