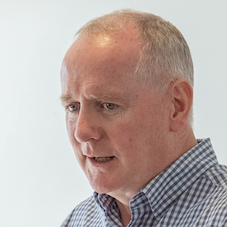 As Eddie Jordan’s right hand man, Mark helped make Jordan the most motivated team in Formula One. He went on to work with Red Bull and Cosworth. He’s founded his own team, worked with some of the greats of F1, and even advised Pixar on portraying motorsport. Mark draws fascinating parallels between the challenging, high-speed environment of F1 and the fast-paced business world.

Mark Gallagher has been involved in the world of Formula 1 for over three decades. A close confidante of drivers, and a former member of the senior management teams at Jordan, Red Bull, and Cosworth, he understands what it takes to succeed in high tech, high risk competition. He considers the key lessons from a sport that is constantly changing, from business models to regulations, pushes boundaries, and partners with almost every concievable industry.

Entering F1 first as a radio and print journalist, Mark joined Eddie Jordan’s fledgling Grand Prix team via a sponsorship role. Part of the management board he ran day-to-day commercial and marketing activities. He then became part of the new Red Bull Racing team, leading their commercial side as they went on to become four-time World Champions. He also headed up Cosworth’s return to Grand Prix overseeing their growth to becoming the engine suppliers to a third of competing teams.

Throughout his motorsport career Mark has built an understanding of what it takes to win in a sport that combines technology, teamwork, leadership, communication, finance and risk in the search for competitive advantage. He draws parallels between the high-speed environment of motor racing and the fast-paced business world. He offers dramatic insight into the practical application of leadership, motivation and teamwork, and the outcomes possible when all three work together. He demonstrates the use of technology to gain advantage, innovating in a competitive environment, and dealing with rapidly changing situations. Mark also examines how the sport copes with change, from new innovations to rule changes to how it dealt with Covid-19 (cancelled races, virtual competitions, and businesses pivoting to produce ventilators).

Mark has worked with top teams and individuals including World Champions Ayrton Senna, Michael Schumacher, Damon Hill and Jenson Button. He continues to work closely with a number of the sport’s stars including David Coulthard, Mika Hakkinen and Jacques Villeneuve.

In addition to his work with F1 teams Mark also the founded the Status Grand Prix team which won the Motorsport World Cup of Motorsport and competed at junior racing levels as well as in the Le Mans 24 Hour race. He has worked in driver management and media affairs, and as a PR and sponsorship consultant to teams. He chaired the F1 health and safety committee charged with striking the balance between commercial concerns, risk assessment, and the safety of drivers, teams and spectators in a sport which still remains one of the most dangerous. He is an analysis and co-commentator on F1 for BBC Radio 5Live, Sky Sports and for ESPN in the US. He also helped develop new hybrid engine regulations introduced to F1, advised on Disney Pixar’s films CARS and CARS II, and has compiled his business insights into the book The Business of Winning- Strategic Success from the Formula One track to the Boardroom.

“We really think Mark will change attitudes to the need for genuine teamwork.” 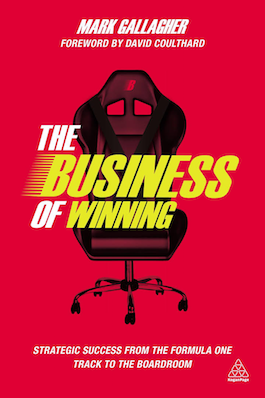