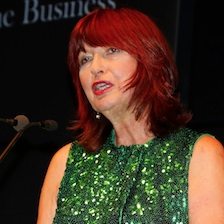 Janet made her name as a young ground-breaking journalist, TV producer and presenter. She has been credited with inventing youth television – but she’s also served as President of the Ramblers Association. On screen and on the page she’s covered everything from architecture to food, education to driving a taxi. After dinner Janet explains why she refused to give in to pressure to make fiddly food on Masterchef, her unique management style, and why she was picked to go into the jungle.

Janet Street-Porter has been a leading personality in the UK media for over three decades. A pioneering producer and broadcaster, an outspoken critic, a celebrity, a commentator, a journalist and a newspaper editor.

Dropping out of architectural college to pursue her passion for journalism, Janet’s first job was at the girls’ magazine Petticoat before joining the Daily Mail as deputy fashion editor and then the Evening Standard as fashion editor. After a time covering everything from buildings to sport in the US for the Observer she joined the newly launched LBC co-presenting a mid-morning show before moving in to television.

Janet presented a range of shows for LWT, including The London Weekend Show, and Saturday Night People with Clive James and Russell Harty. She gained a reputation for youth-focused, forthright and innovative programming. Her reputation was a perfect fit for the new Channel 4 where she edited the acclaimed Network 7 show, a youth culture and current affairs show. She then moved to BBC2 as head of youth and entertainment features. She built the department from scratch to become a team of 350 people making a run of shows as popular and influential as they were derided by more traditional media including DEF II, Rapido, Rough Guide, and the cult sit-com Red Dwarf. She also produced the Full Wax with Ruby Wax and commissioned Fantasy Football League.

Since then she has set up her own production company, founded L!VE TV, edited the Independent on Sunday, and has become a regular face on everything from Have I Got News For You to I’m a Celebrity..., Question Time to Countdown, MasterChef to Loose Women. She’s also fronted programmes that have seen her teach nine-year-olds, drive a London taxi and follow the legendary Nikolaus Pevsner’s guide to England’s buildings.

Janet has remained an outspoken, irrepressible figure throughout her career. Never afraid of controversy or upsetting the establishment she is seen as a both a national treasure and a trouble-maker. As a writer and journalist she has tackled education, society, work, food, politics, and her lifelong passion, architecture and the built environment, for a range of publications. She was also President of the Ramblers’ Association and has walked from Edinburgh to London in a straight line.

“Brilliant! Great story and very engaging. We were delighted.”