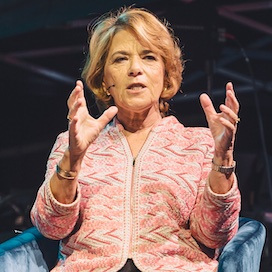 Lorraine was the first woman Controller of BBC One. Armed with a £1bn budget she launched Spooks and Strictly, reinvented Dr Who and introduced new branding – changing the feel of the network. She then achieved hits at Talkback Thames with X-Factor, BGT and The Apprentice. Away from the media she was appointed CEO of The Royal Foundation with a mission to professionalise the set-up. As well as key insights into leadership and implementing change, her time working with The Foundation and the Heads Together campaign has provided her with an understanding of the duty of employers to the mental health of their people.

Lorraine Heggessey was the first woman Controller of BBC One. During her time at the helm, the network’s ratings overtook ITV for the first time since it launched in 1955. Armed with a £1bn programme budget she introduced Spooks and Strictly Come Dancing, and scored a massive success with a new-look Dr Who. She has since gone on to pivotal leadership roles in the private and charity sectors.

Lorraine started her media career as a producer for Newsnight, Panorama and Dispatches, making a variety of films on everything from the treatment of Jews in Soviet Russia to a bizarre interview with the former gangster ‘Mad’ Frankie Fraser. She then became Head of Children’s BBC, where her duties included explaining to Blue Peter viewers why she had sacked Richard Bacon.

When she took over BBC One, Lorraine was faced with a network struggling to escape from a traditional, establishment image and orthodox thinking. As well as commissioning a raft of popular and original programmes, she ditched the dated station branding and reviewed a number of protocols - without compromising the part the channel plays in the national psyche.

Lorraine moved from the BBC to become CEO of Talkback Thames, by then a major independent production company. Again she backed winning formats, launching Britain’s Got Talent, X-Factor, Take Me Out and The Apprentice onto UK television screens. She radically overhauled the company’s repertoire, successfully balanced creative and commercial imperatives, and oversaw a 50% increase in profits. After Talkback she moved on to a series of high-profile media roles, including advising the Channel 4 Growth Fund, an innovative proposition to enable new businesses access to the broadcaster’s advertising. She also established a new production group, securing private equity funding, and building it into one of the country’s biggest independent production companies before selling it to ITV.

Moving away from the media Lorraine took on the CEO role at The Royal Foundation of the Duke and Duchess of Cambridge and the Duke and Duchess of Sussex. Charged with professionalising the foundation, she used her business experience to develop a model the combined philanthropy with helping other charities to grow, including the Heads Together mental health campaign.

In presentations Lorraine describes the challenges of leadership and the importance of empowering teams. She looks at how to implement change, inspire your people, and encourage a sense of purpose and an intrapreneurial mindset. From her time at The Royal Foundation she also reflects on how mental health is viewed at work and the vital importance of prioritising the mental wellbeing of staff of all levels, backgrounds and responsibilities.

“An enormous hit with our guests.”