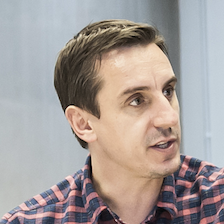 In almost 20 years at Manchester United (including five as club captain) Gary became one of the most decorated English players of all time, winning 20 major trophies including two Champions’ League and eight Premier League titles. Noted for his work ethic and professionalism he has become a popular pundit and analyst on Sky Sports, has coached including a spell as England assistant manager, and has notably built an impressive business portfolio including extensive property interests.

Footballer turned pundit and businessman Gary Neville is best known for his two-decade long career at Manchester United. During his time with United he became a key part of the team on and off the pitch in one of the most successful periods for one of the most successful clubs in English football. Seen as a dedicated, determined professional, he has applied his outlook to his roles on television, in business, and as co-owner of a non-league football team.

Gary was a part of the famous Manchester United Class of 92, cited as one of the best groups of young players in recent history and featuring the likes of Ryan Giggs, David Beckham, Paul Scholes and Gary’s brother Phil. Gary went on to spend his entire twenty-year playing career at United. Playing over 600 games he won eight Premier League titles, three FA Cups, one League Cup and two Champions’ League titles, making him one of the most successful European players of all time. One of the club’s longest serving players, he was captain for five years and came to epitomise the passion and professionalism of the team. At international level Gary also became one of the most capped English players in history. He appeared over 80 times and played in three World Cups, becoming rated as one of the best English right-backs ever.

After his playing career, Gary took up coaching as well as media roles. He had spells as the Assistant Manager of the England team and as Head Coach at Spanish club Valencia. In the media, he became a popular, often outspoken analyst on Sky Sports. He was praised by fans and experts alike for his unbiased, tactical insight and examination of the game, as well as his entertaining double act with former Liverpool rival Jamie Carragher.

With a long-term interest in business, and in particular property, Gary also invested in a digital agency and a property development company, both based in Manchester. He also co-owns (with Ryan Giggs) a hospitality company, which has a portfolio of hotels and restaurants. The pair gathered much acclaim for opening up one of their Manchester hotel projects, whilst it was under construction, to homeless people. As well as much needed shelter they also provided training and support to help them turn things around.

Alongside former teammates Giggs, Scholes, Nicky Butt and brother Phil, Gary is also co-owner of Salford City Football Club. The group’s purchase of the club, and the revolution they attempted to introduce on and off the pitch, was documented in the BBC series Class of 92.

With a wealth of insights from his playing days, Gary offers a look into the psyche of a professional sportsperson, at the motivation required to achieve at the highest level, at leadership and at what it means to be apart of a successful team. He also looks at the risks and rewards of stepping outside of your comfort zone, and at the lessons he transferred from sport to business and those he has had to learn on his own.