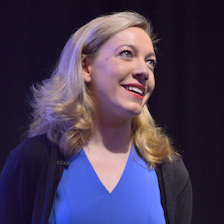 Working at the intersection of business, politics, society and technology with both Facebook and YouTube, Elizabeth has helped leaders around the world understand how social media has changed the balance of power. In an era where the public’s need for authenticity has led to Donald Trump’s Twitter presidency, she asks how leaders in all areas can be accountable and transparent. She also looks at wider issues from the tech sector from the implications of ever-expanding global internet access to the millennial workforce to the industry’s moral responsibilities.

Elizabeth Linder founded and led Facebook’s EMEA region Politics and Government division. She was instrumental in building links between the social media giant and branches of government and politics around the world. Now heading her own consultancy, she aims to improve the conversation between the public, business, and political leaders. She is also a Senior Consulting Fellow at Chatham House where she leads the think-tank’s Connectivity Initiative and advises on the future of foreign policy in a connected world.

A California native, Elizabeth started her Silicon Valley career at YouTube, just after its acquisition by Google. Her work there coincided with the 2008 presidential election and the nascent use of social media and user-generated content to debate policy and express opinions. She worked with both of the main parties, who felt they’d lost their usual control over how stories were being told, to navigate this new environment.

Facebook approached Elizabeth to help them understand and further the company’s role in politics and society. She worked on the firm's presence around the world, promoting its potential in business and politics, and accompanying Mark Zuckerberg on his first European tour. Looking at how politics and diplomacy were failing to understand the new digital narrative space she helped start Facebook’s Politics and Government division. In London she established the division’s EMEA concern, working with parliaments, royal households, politicians and interest groups on their Facebook presence and on the soft-power influence of social media.

A communicator rather than an engineer, Elizabeth also found herself increasingly representing Facebook and the wider tech sector to other industries as well as governments. As such she tackles some of the criticisms levelled at the sector from fake news and tax bills to encouraging an insular, male-dominated work culture. She also looks broadly at the intersection of technology, politics, business and society from the effects of AI to the millennial workforce.

Elizabeth’s consultancy, The Conversational Century, is inspired by the dramatic shift from an era of diktat and spin to a 21st century of open, if sometimes confusing, debate. With first hand experience of the influence of social media, for both good and ill, she considers the realities, hype and consequences of an increasingly connected society. She examines how leaders of all types have failed to grasp the implications of the technological revolution. Nowhere is this more obvious that in politics, where a failure to engage authentically with the public has led to Donald Trump‘s Twitter presidency. She considers where power now lies in the relationship between leaders and their constituents – be they public, customers or employees, and the unprecedented pressure to be accountable and transparent. Looking at social media’s impact from Brexit to the Arab Spring she explains the effects of extending internet coverage to the remotest parts of the world, the optimum length of a politician’s Facebook post, and the innovative thinking behind targeted advertising.