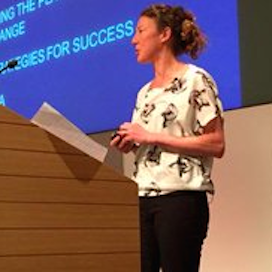 Chrissie is acknowledged as one of the greatest female endurance athlete on the planet. She is a four-time Ironman world champion – a race that comprises a 3.8km swim followed by a 180km bike ride, and then a full marathon. The former civil servant and now Global Lead for Health & Wellbeing for parkrun speaks about the mindset, persistence and motivation required to achieve your goals.

Chrissie Wellington is a former professional triathlete, a four-time World Ironman Champion, and World Record holder for Ironman-distance races. She was the first British athlete to hold the title, and achieved this after only a year as a professional.

Chrissie planned to be a lawyer after university but a period of travelling saw her realise that she was more interested in international development. She undertook a career at the Department for Environment, Food & Rural Affairs, as an advisor on international development policy. During her time as a civil servant Chrissie was running as a hobby, which led to completing a marathon and then, after some setbacks, including being hit by a car, she became involved in triathlon. After working in Whitehall, then in Nepal for a Nepalese NGO, she returned to the UK and decided to become a professional athlete at the relatively late age of 30. Within five years she had been crowned World Ironman Champion four times, and was one of only three women to have achieved three consecutive victories at the Ironman World Championships.

Ironman triathlons are some of the toughest endurance races in the world, usually lasting 16 hours and combining a 2 ½ mile swim, a 110 mile bicycle ride followed by a marathon. With her unconventional journey to becoming the best at one of the world’s toughest sports, Chrissie speaks passionately and engagingly about taking on the impossible, persistence, and achieving your goals, whether in life or in business, as an individual or a team. She energetically tells her inspiring story of facing fears, planning, focusing on details and overcoming adversity.

Now retired from competition, Chrissie works as Global Lead for Health & Wellbeing at parkrun, the network of community running projects. Alongside her lessons in performance, motivation and mindset, she also looks at the importance of wellbeing and the way sport can improve lives. She also contributes to media coverage of triathlon, including the BBC’s Olympic coverage of the sport.