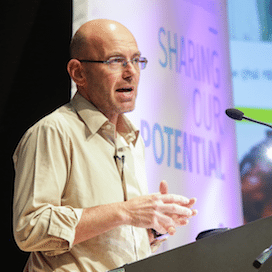 “Wayne Hemingway’s talk was inspirational. If only all speakers had the same enthusiasm”

His story is told with real passion - and a very down to earth style, Great.

Wayne's presentation was very good. It was well suited to the occasion and he communicated his story with enthusiasm and in plain English. The second element of the day involved group work at tables followed by a feedback session led by Wayne. This worked well enough though I would have preferred Wayne to be somewhat more dynamic and interactive with the audience. The audience reaction though was very positive.

Wayne was very laid back and understood the purpose of the event so was able to provide a good presentation tailored to the specific audience, whilst providing something a little different at the same time.

Wayne successfully met our main requirement which was to inspire the audience. The audience reacted very well to Wayne. I think they would have enjoyed having him on stage for longer!

Wayne drew a huge audience and provided some brilliant, out of the box provocative thinking. He also took the time to engage with those interested to continue conversations. It was great to be able to involve him.

Wayne was brilliant. He covered all the aspects we were interested in plus went into more detail on areas we didn't expect him to. `very professional delivery and much more humorous than expected!The audience were all fans of his work and this was evidenced by the turn out! Wayne was pushed for time but the audience could have asked him a great deal more questions.Perfect service from JLA as usual.

Wayne delivered an interesting and motivational speech that inspired the students present and created a talking point for the employers too. His talk was insightful and left a lot of attendees talking about his journey between themselves long after he had finished speaking.

Very positive, many complained that he didn’t have long enough and they could have continued to listen to his presentation for longer.

This is now the 3rd time I have had the pleasure of working with Wayne. He is brilliant, intelligent, funny engaging and thought provoking. Our conference delegates were captivated by him. What a perfect way to close a great conference.