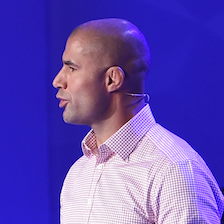 Richard was an excellent speaker in a number of ways. Richard was well presented and prepared as well as being very personable. This coupled with his extraordinary achievement as a backdrop meant that he met our objectives and more. His focus on some of the themes I had discussed with him before the speech he eloquently integrated. Overall it was an excellent evening that Richard made a significant contribution to. The audience was fully engaged, which on a Friday evening after a weeks work is a great achievement. The scale of his achievements is inspiring but also something that he articulates with passion and sincerity. It was pleasure to meet Richard and I know he has gained a number supporters at M&G following his speech.