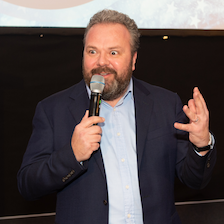 I just realised I have never given feedback for Hal Cruttenden. I was really impressed by him at the HVR awards, he had done a lot of research into the subject and he engaged the audience without offending anyone. I would definitely use him again

Hal was brilliant. It's a super-tough crowd in that room and he had them very well entertained. As always, when the nominated award collector is announced they always bring their friends on stage (or change gender!) and he played with that really well.

Short answer – he was hilarious!!! Had a great rapport with the audience and the sponsors as they came up to present, chatted away to winners when they collected their award, and really went down well with everyone. Nothing but positive feedback from all guests, and he was a nice guy as well so good from an organiser point of view too.

Hal was a great speaker, very professional, very well received and was a pleasure to work with. He made the awards ceremony, which can be boring, entertaining and light hearted, but also kept the feeling that we are there to celebrate companies hard work. I have had great feedback from the guests that I have spoken to, they thought he was brilliant!

Hal was a great success. I have received nothing but good feedback so far. He was lovely to work with as well.

I can't even remember the last time someone made me laugh that much! I was not the only one reduced to tears!

Lovely to work with, he kept the energy in the room high. Hal had read the information about our event and made sure he knew a little about the audience and adapted his performance to relate to the products in the awards making winners feel special. He met our objectives perfectly.

Those of us who run Awards serving the 'nichier' sectors have a pretty demanding brief for our comic hosts: we want them to be as funny as they would be in their stand-up, and maybe just as rude, and definitely sparring with our audience members. BUT, we would also like them to take a bit of an interest in what 'our' industry does, rather than just laughing at it, and we'd like them to be a tad respectful of our people and the pride they take in their achievements - even if the prizewinning product does look to the layman like a white box or a widget. And did i mention that we'd really like the host to keep the pace up, as we've got lots of awards to get through, while having everyone leaving the event with a warm feeling too? It's quite a brief, but it's one that Hal Cruttendon has delivered on for me, on two different occasions. SImply put, you know if you are planning an Awards that Hal will put the effort in to making it a memorable night.

He was a great success and it was a pleasure to meet him – such a lovely man.