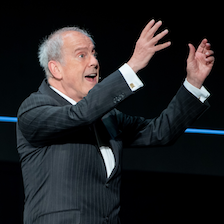 “Gyles was absolutely fantastic and pitched the speech perfectly. He was the icing on the cake.”

Gyles received a standing ovation, his research and personalisation were much appreciated.

Gyles was hilarious and a true highlight for the evening, he kept the crowd laughing whilst professionally compering the awards.

Thank you for your brilliant hosting of our awards. You really brought the occasion to life and the feedback has been exceptional.

The idea of inviting Gyles Brandreth to host the evening and the Awards was a master stroke - no one has done it better.

Standing ovation - so very well received. Feedback received to date has been very positive - one of the best speakers we have ever had.

Gyles was fantastic and was such a gent. His speech couldn't have been more perfect and apt if we had written it for him. The fact that he was on just before the Minister worked brilliantly, and he said things that no-one else could have got away with. Fortunately the Minister took them in the matter intended and, in fact, had a little dig back which was priceless.Thank you for all your help with the change of dates etc - as far as I'm concerned it was definitely all worth it and his attendance made the event.

Please would you thank Gyles on our behalf. He was both ebullient and hilarious! Many people commented that the evening was a huge success and Gyles certainly played his part in making it so. I did thank him before he left but would like you to pass on thanks from all of us at Laing & Buisson, especially myself and Wililam Laing our Chief Executive.

Gyles was absolutely fantastic at our Awards ceremony. He is the only presenter I have ever seen receive a standing ovation at a corporate Awards. He was thoroughly enjoyable to watch and engaged the audience completely with outstanding knowledge of the industry. I would recommend him for ANY event!

IMHO, this was the best ever awards ceremony in the whole history of the SC Magazine awards. Why? Well it was all down to one thing: the compere – former Member of Parliament Gyles Brandreth. For while in many countries one has to put up with inarticulate mumblings of bland mediocrity, the British political arena is quite the opposite – if Mr. Brandeth is anyone to go by: lively, articulate, witty, humorous, captivating! Despite the somewhat advanced years of comrade Brandeth, he was as sharp as a knife. He had the whole audience of around a thousand in fits of belly laughter, stamping its feet, and applauding incessantly! Though I couldn’t catch every single nuance of his particular brand of British humor, on the whole I can still say that his performance was very funny, decently self-deprecating, and appropriately topical. 10/10!

Gyles met all our objectives and was an excellent after dinner speaker, very clever and very entertaining.We don't tell our guests who the speaker is going to be, a few of them recognised Gyles when he came into the bar which went down very well.We have had very good feedback from a number of our guests and our German colleagues, although we did have to explain a few things to them!I think that Gyles will be getting further bookings from some of our guests over the next few months!

Gyles did an amazing job of hosting the event, and co-presenting the awards section of the evening. What also makes Gyles such an incomparable speaker is that he effortlessly makes every quip and comment relevant to our audience and to our industry. This is very rare and does so much to engage the audience – particularly a pan-European crowd like ours which only has office products in common!

To be honest the only objective was that our guests enjoyed their evening and from the number of emails we have received from guests Gyles certainly enabled us to meet that!

We had a fabulous night at the event and Gyles was the perfect host. I honestly could not speak highly enough of him - he was professional and hilarious and kept the audience's attention all night (even when we overran by 30 minutes).

Everyone has said Gyles was the best speaker we have ever had and what a fantastic event it was. The effort he put into weaving anecdotes about the audience and our company into his repertoire were greatly appreciated. We cannot thank him enough and please, once again, send my apologies for the appalling sound system. It was also the largest attendance we have had for many years and we do feel that was down to Gyles’ ‘pulling power’.

Gyles was sensational at the London Transport Awards last night: the best speaker we have had in 13 years of running the event.

Gyles went down very well indeed and everyone commented on how entertaining he was and very funny. I know that we all could have listened to him well into the small hours.

"I just wanted to pop you a note to say a HUGE thank you to Gyles for hosting the Annual Dinner last night. He was just brilliant…..he had the guests in fits of laughter constantly and there was never a dull moment. He really fitted the bill and he was just great!"

What a breath of fresh air!! Gyles was just wonderful at our annual dinner. From the moment he arrived for rehearsals, he had everyone in hysterics. His professionalism in taking the time to meet all of the awards nominees was the sign of a great compere. He knew exactly the line tread and the laughter in the room spoke for itself. We couldn't recommend Gyles enough. His ability to include details about our organisation and the sponsor showed his real talent as a public speaker and his enthusiasm really got everyone motivated for the evening - it was a night guests won't forget in a hurry. Thanks again Gyles and the team at JLA

Wonderful! Exceeded our expectations. Clever, knowledgeable with just the right level of humility, self-deprecation and teasing.

This was the second time we had booked Gyles and not only did he remember us, he had lost none of his verve and vigour. He is a master at incorporating key messages with such accuracy and to weave them into his speech with ease. He knows so many interesting and influential people and has a story for every situation. Still one of the best!