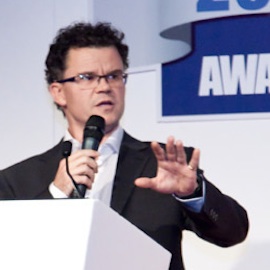 Dominic was fantastic, especially as our room was a very difficult one, would definately not hesitate to book him again.

His material for stand up was excellent, really funny. He was however 40 mins late which pushed back rehearsal time. He was also a bit of a mess on stage at times. He did not follow the script and was crossing bits of the script out with his pen as he worked through it as well as folding pieces of paper when he was finished which looked unprofessional. At times he really looked like he was struggling.

The audience really enjoyed Dominic's act, and got through the awards ahead of schedule, which was great.

The Institute of Sales Promotion

Collectively, we were very happy with Dominic, and thought it was pitched just right for a very diverse audience.

Your expertise as a host ensured that the show ran extremely smoothly and made the evening a great success. We have received very positive comments about the ceremony. Our clients and guests enjoyed the event tremendously.

Dominic did a great job. He achieved the combination we needed of funny, considered in terms of the business audience, and consistent is his style. He wanted to change the format and I am pleased to say we were able to accommodate that. It would have helped if we had known before 4 o’clock – but that’s fine! He also didn’t blanche at the news that we might incur some sort of protest. It didn’t happen, but he was totally professional about the fact it might.

Dominic did a great job for us. A difficult, late night after dinner slot was overcome with some great observational humour. I will never forget Dominic's interpretation of a BS7671 wiring installation - he had the electrical contractors in hysterics. Are we really that dull Dominic? Joking aside, would not hesitate to use Dominic again!

Dominic was very funny and made an effort to include jokes relevant to the motor trade. The audience thoroughly enjoyed Dominic and appreciated the topicality of his jokes.

Dominic has worked with us a few times hosting awards events and each time is superb. Dominic gets corporate perfectly - his routines are well researched so The material is topical; and his interraction with our sponsors, finalists and winners is spot on. No hesitations in recommending Dominic as he is a polished, and very funny, host.

A fabulous host for our event. On stage provided fantastic well researched comedy for the audience, was consistently hilarious and engaging throughout the awards ceremony, was an excellent and quick thinking auction host. Off the stage he was a consummate professional at all times, hugely experienced and flexible -a real pleasure to work with. We will recommend his services to other clients’.

“Absolutely brilliant, his performance was top class. He was funny and compered the evening superbly”

“All the staff loved his stand up and compering. We would not hesitate to book him again.”

Professional, attentive, and had done his research. He got the whole audience laughing and in the mood for our awards.