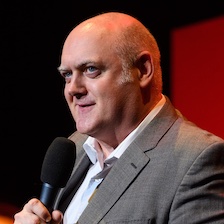 “Dara held the Great Room. You could have heard a pin drop – apart from the laughter.”

A big man with a big repetoire. He commanded the audience totally with that great Irish sense of humour including how to use a mobile deep on the Underground.

Dara was an excellent speaker - incredibly funny and very entertaining for the audience. He moved through the awards with excellent pace and conducted them in a way only a practised professional could. I would not hesitate to recommend Dara.

Dara exceeded our expectations. HE was great in the rehearsal and eager to please. Very professional – the nicest host I’ve worked with to date.

His act was topical and he kept up a good pace through both halves of the awards show. We had a good response from the attendees, with several asking for a repeat performance next year! They are an audience who are notoriously hard to control, and who talk through the awards and don’t listen, so it was difficult for him to get them to be quiet, particularly during the awards. They seemed to really enjoy the comedy at the start of both awards halves though. One comment the production company had was that it was very difficult to get him down to the backstage area at the start of the awards which was slightly nerve-wracking for the events team when they needed everyone in place backstage before the show opener.

Dara was "Sheer Brilliance" at the Skoda UK Retailer of the Year event for 600 guests at the new CCD in Dublin, his style and proffesional skills at awards evenings were very much admired and quickly adopted by the client in rehearsals. This format made a great impact on the audience which gave Dara the perfect platforn to entertain and compere the important award sections of the evening. Awesome, phenominal event and Dara's performance "Sheer Brilliance"

Dara did an excellent job. Liked the fact that he did some industry-related gags, which the audience responded well to.

Dara was brilliant, he spoke about relevant topics and had everyone in the room laughing!