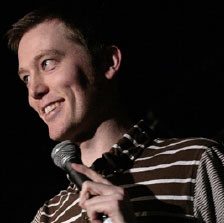 Alun took the role seriously and was well prepared. He was very keen to get the right tone and to make a success of his contribution to the evening. His presentation of the awards was slick, but amusing as well, a good combination. All in all, a good choice and good value for money. Audience reaction was mixed - but positive on the whole. It was an international audience and some of the humour may have been a bit lost with some of the audience – but this would be the case with anyone. Alun held their attention - (which has not always been easy to do in previous years). No negative feedback received at all and we have had some feedback that it worked better than last year.

We have received much positive feedback about Alun from both guests and sponsors:Alun Cochrane was a great success; arguably one of the best I have seen. I thought Alun Cochrane was awesome.A brilliant night - certainly the best of 8 or so that i've been to! From Alun Cochrane to the M Factor, everything was spot on!

Alun was ideal for the audience and exceeded expectations and objectives. Alun checked the guestlist and personalised his set to some of the companies present - the audience loved this!

Just a quick note to express my appreciation for your efforts at last night’s Cooling Awards. My ideal presenter is a) funny, b) works with the crowd and c) is in command of the Awards bit, which is always a long stretch. You certainly delivered all that for us in spades last night and I really appreciated the way in which you moved the Awards on smartly but kept it funny. Thanks for giving my crowd a great time and for making it a memorable night.

Alun was both excellent last night at the Vodafone Partner of the Year Awards and the feedback from the Vodafone team and all of the Partners has been excellent.

Alun was brilliant. Really lovely and helpful. The audience really enjoyed his act and he was right on the mark. He also stayed around to mingle with guests afterwards which was appreciated. I’ve had nothing but good feedback.

He was really good to work with. He told me he always found automotive crowds quite hard and ours was no exception. The overall feedback was good. There were a few gags that didn’t get much reaction, but he had plenty of material to fall back on that did work.

I have worked with Alun on a number of awards ceremonies and I find him a fantastic host. The crowds are always very pleased with his routine and he really keeps the awards process fun and involving. He was well prepared for the industry he was speaking to and took the time to speak to our editors and read up on each subject which really showed in his opening act. As an events manager he is easy to work with as he is calm and friendly and takes everything in his stride. A complete professional and a joy to work with! Will definitely be having him back.

Over the years, Alun has honed the job of Awards host to the point where he now offers organisers the Holy Grail - the prospect of a night where we can effectively relax, safe in the knowledge that he has the whole thing under control. Alun offers a combination of being dependably funny; at ease with the nichest of industries; and thoroughly professional with the business at hand - putting wit and pace into a lot of categories and a lot of names. The fact we broke our house rules to invite him back for a second hosting says what we think of him - catch him while he is still in the price bracket!