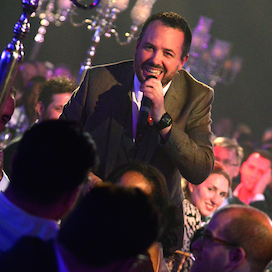 We asked Abandoman to perform at our staff Christmas Party which serves as a big thank you to all employees for their hard work over the last year. The guys were on after dinner and before the dancing and were great at getting the audience into the party spirit. We just wanted them to be entertaining and make the audience laugh and they definitely succeeded in doing that without being offensive at all. Brilliant.The audience loved Abandoman and thought the guys were so clever at using details taken from some of the audience lives and incorporated it into hip hop songs. Towards the end everyone had their hands in the air and were singing along with the guys.

Abandoman were FANTASTIC. They went down an absolute storm. Would certainly recommend them to anyone.

Wow - Abandoman were the best awards dinner entertainment I've ever seen. Not only were they engaging, interactive, on message and funny, but they were also really nice guys! I would absolutely recommend them to anyone and would happily book them for other clients. Thanks guys - cos you made me look good!!

One of the best things I've ever seen. Our delegates were tripping over themselves to shake hands with Abandoman. Would recommend them to anyone and everyone. EXCEPTIONAL

Abandoman were genius and an absolute hit with the audience (Novo Nordisk) –the way Rob and James get the client information and weave it into their act in such a short space of time is fantastic and with Rob’s easy humour it really hits the right spot. I have had lots of comments on how great they were, a few even going so far as to say the best act they’ve ever seen at a corporate gig so well done to the guys a really excellent night.

Abandoman were absolutely excellent. Feedback from staff has been outstanding with everyone commenting on how perfect they were for the audience. Rob and his team were nothing but polite and very professional and no requests were too difficult. I would happily use Abaondoman again for future events and have already passed on JLA’s details to staff who have asked about using Abandoman in the New Year.

They clearly understand the purpose of the event and made reference to Skype, their link with Microsoft and even where they were staying.The voice of God announcing the coaches was interrupted by the CEO jumping on stage to ask for an encore! It was the first corporate encore I’ve seen! The audience absolutely loved the performance and it is still being talked about at other events.

A delight to work with and engaged so well with the audience! The feedback has been great from the guests, clients and sponsors! Such good fun, lots of laughs and everyone wanted to be involved!

Fantastic.... engaging, entertaining and a real pleasure to work with.