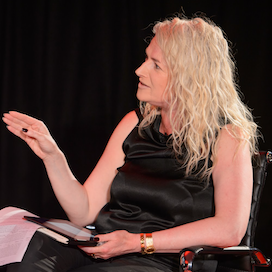 Having secured exclusive interviews with the likes of Sheryl Sandberg, Justin Trudeau, Bill Clinton, Elon Musk, and Eric Schmidt, Sam most notably led negotiations for the ground-breaking interview with HRH Prince Andrew. She reveals what interviews like this say about leadership, reputation and communication in the modern age. She also examines the personal and professional relationships behind the scenes; the persuasion, compromise and empathy required to develop trust and understanding between all parties, and knowing what questions to ask (and which ones not to).

For ten years Sam McAlister was the interviews producer on BBC 2’s flagship news programme Newsnight, securing head-to-head pieces with Silicon Valley CEOs, world leaders and Hollywood stars. A former barrister, she turned to journalism after a successful career in criminal law and has since negotiated with everyone from Buckingham Palace to the White House, Facebook to Tesla.

Working in a largely unseen role, Sam undertook the delicate negotiations that underpin some of the biggest exclusive interviews in British news. From the initial approaches through research and up to the filming of the piece, she built and maintained relationships with subjects and their representatives whilst retaining journalistic integrity and independence.

Most notably Sam led negotiations for the ground-breaking interview with HRH Prince Andrew. The first time a senior royal had agreed to such a journalistic interview, and in the midst of an international scandal, it went on to make headlines around the world and have a serious impact on the Royal Family itself. Having directly negotiated with the Royal Household and the Prince himself, Sam talks revealingly about the careful personal and professional relationships that were key to the talks. She also looks at what the interview revealed about leadership, reputation and communication in the modern age.

With examples from other set-piece interviews Sam also examines the practicalities of how to understand who you’re dealing with, and what they’ll be prepared to agree to. She studies the persuasion, compromise and empathy required to develop both trust and understanding between all parties, and also the right questions – questions that will not be met with rejection or hostility, whilst still being searching and relevant to the audience.