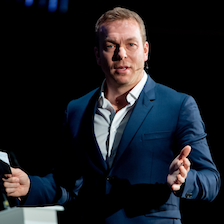 Chris has amassed eleven World Championship titles and six Olympic golds. As well as broadcasting, promoting his range of bikes and raising cycling awareness, he’s now forging a successful motorsport career. In a hugely instructive presentation Chris explains how he dealt with intense training and competition, how he learned to bounce back after defeats – and why the team constantly searches for marginal gains.

Chris Hoy is an eleven time World Champion and winner of six Olympic gold medals - a tally that marks him as one of Britain’s greatest Olympians, second only to his former team-mate, Jason Kenny.

Starting out in competitive BMX at the age of seven, Chris became Scottish champion and was ranked ninth in the world. As a teenager he also competed as a rower, winning silver in the junior coxless pairs at the British Championships; but he decided to concentrate his efforts on track cycling and by the age of twenty he was part of the national squad.

Chris’ first Olympic gold came in Athens, winning the 1km time trial in a competition many saw at the best ever in the category. Another three wins at the Beijing Games saw Chris become the first Brit in a century to claim three golds in one summer games, marking him out as a British sporting hero. In London, however, he was promoted to sporting legend winning both his competitions and providing some of the most emotive images of the games. He retired from competition with an incredible six golds and a total of seven Olympic medals.

With characteristic humility, Chris acknowledges his good fortune at being able to have a job he loves, whilst also recognising his unquenchable desire to win. In speeches he looks at the gruelling physical and mental aspects of elite competition. In recounting his own story from Athens 2004 to Beijing 2008, Chris describes the process by which he found the physical and emtional fortitude to endure his seperation from family, and how this ultimately shaped his performance. Chris is also well practiced speaking about marginal gains, motivation, teamwork and resilience from a sporting and business perspective.

He considers the work of acclaimed psychologist Steve Peters and Team GB’s culture and self-belief. He also gives his account of the highs and lows, and how the feeling of winning by just a couple of thousandths of a second temporarily overwhelms the agony of pushing yourself to the limit.

Chris is enjoying a second sporting career in motorsport, successfully racing in the British GT and Le Man Series, including the famous 24 Hour race. He is a key part of the BBC’s team covering cycling events, including the Olympics, the Tour de France, Track Cycling World Titles and the European Championships. He also has his own range of bikes (HOY bikes) and has published a series of children’s books. Chris is an ambassador for Unicef and the Scottish Association for Mental Health (SAMH), and won the BBC Sports Personality Lifetime Achievement Award.

You rarely see an audience as awestruck as they are when Chris walks onstage. In an age full of so-called legends, he’s one of the few I work with who truly deserves the accolade - both for his achievements and the reaction he inspires. He exudes determination and charm, and despite all the medals his feet are still very firmly on the ground. He’s an inspiration, in every sense. JLA Agent Anke Schuster 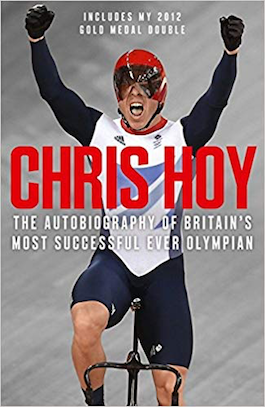